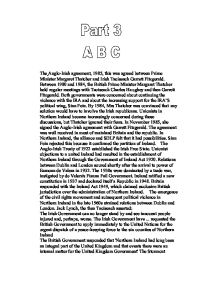 The Anglo-Irish agreement, 1985, this was agreed between Prime Minister Margaret Thatcher and Irish Taoiseach Garrett Fitzgerald

The Anglo-Irish agreement, 1985, this was agreed between Prime Minister Margaret Thatcher and Irish Taoiseach Garrett Fitzgerald. Between 1980 and 1984, the British Prime Minister Margaret Thatcher held regular meetings with Taoiseach Charles Haughey and then Garrett Fitzgerald. Both governments were concerned about continuing the violence with the IRA and about the increasing support for the IRA'S political wing, Sinn Fein. By 1984, Mrs Thatcher was convinced that any solution would have to involve the Irish republicans. Unionists in Northern Ireland became increasingly concerned during these discussions, but Thatcher ignored their fears. In November 1985, she signed the Anglo-Irish agreement with Garrett Fitzgerald. The agreement was well received in most of mainland Britain and the republic. In Northern Ireland, the alliance and SDLP felt that it had possibilities. Sinn Fein rejected this because it confirmed the partition of Ireland. The Anglo-Irish Treaty of 1922 established the Irish Free State. Unionist objections to a united Ireland had resulted in the establishment of Northern Ireland through the Government of Ireland Act 1920. Relations between Dublin and London soured shortly after the arrival to power of Eamonn de Valera in 1932. The 1930s were dominated by a trade war, instigated by de Valera's Fianna Fail Government. Ireland ratified a new constitution in 1937 and declared itself a Republic in 1948. Britain responded with the Ireland Act 1949, which claimed exclusive British jurisdiction over the administration of Northern Ireland. The emergence of the civil rights movement and subsequent political violence in Northern Ireland in the late 1960s strained relations between Dublin and London. ...read more.

They believe that the people of Britain would wish, in friendship to all sides, to enable the people of Ireland to reach agreement on how they may live together in harmony and in partnership, with respect for their diverse traditions, and with full recognition of the special links and the unique relationship which exist between the peoples of Britain and Ireland. The Taoiseach, on behalf of the Irish Government, considers that the lessons of Irish history, and especially of Northern Ireland, show that stability and well-being will not be found under any political system which is refused allegiance or rejected on grounds of identity by a significant minority of those governed by it. For this reason, it would be wrong to attempt to impose a united Ireland, in the absence of the freely given consent of the majority of the people of Northern Ireland. He accepts, on behalf of the Irish Government, that the democratic right of self-determination by the people of Ireland as a whole must be achieved and exercised with and subject to the agreement and consent of a majority of the people of Northern Ireland and must, consistent with justice and equity, respect the democratic dignity and the civil rights and religious liberties of both communities, including: - the right of free political thought; - the right of freedom and expression of religion; - the right to pursue democratically national and political aspirations; - the right to seek constitutional change by peaceful and legitimate means; - the right to live wherever one chooses without hindrance; - the right to equal opportunity in all social and economic activity, regardless of class, creed, s*x or colour. ...read more.

Reaction to the Anglo-Irish Agreement varied according to the various interpretations of its meaning. The Agreement meant different things to different people. Unionists regarded the Agreement as the beginning of the end of the Union, while republicans saw the continuation of British rule by other means. Even the framers of the document diverged in their interpretation. Britain's attempts to re-assure unionists contrasted with the Irish Government's need to defend the Agreement against republican critics. The reaction to the Anglo-Irish Agreement from the international community and public opinion in the Republic of Ireland and Britain was favourable. The traditional bi-partisan nature of party politics in the House of Commons towards Northern Ireland guaranteed its acquiescence. The Commons voted in favour of the Agreement by 473 votes to 47. The Agreement was also endorsed by a majority of members of the Oireachtas (Irish Parliament), with Fianna F�il (FF) voting against. Support in Northern Ireland was limited to John Hume's Social Democratic and Labour Party (SDLP), who had indirectly influenced its outcome through the New Ireland Forum and who been kept informed of negotiations through contact with the Irish Government. Opposition to the Agreement emanated from traditional nationalists, or republicans, in both parts of Ireland, primarily Sinn F�in (SF) and Fianna F�il (FF), and most vehemently, from the unionist politicians and population of Northern Ireland. Breakaway terrorist groups such as the Real IRA haven't agreed with the IRA's ceasefire. They have carried on bombing in places like Omagh and London. But on 28 July 2005 the IRA released a very important statement, saying that they were giving up violence for good. They also promised to destroy all their weapons and told all their members to stop fighting as well. ...read more.