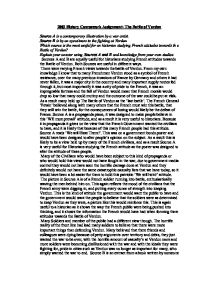 The Battle of Verdun.

2003 History Coursework Assignment- The Battle of Verdun Source A is a contemporary illustration by a war artist. Source B is by an eyewitness to the fighting at Verdun. Which source is the most useful for an historian studying French attitudes towards the Battle of Verdun? Explain your answer using Sources A and B and knowledge from your own studies. Sources A and B are equally useful for historians studying French attitudes towards the Battle of Verdun. Both Sources are useful in different ways. There were varying French views towards the battle of Verdun. From my own knowledge I know that to many Frenchmen Verdun stood as a symbol of French resistance, over the many previous invasions of France by Germany and others it had never fallen, it was a major city in the country and many important supply routes fed through it, but most importantly it was a city of pride to the French, it was an impregnable fortress and the fall of Verdun would mean that French morale would drop so low that many could mutiny and the outcome of the war could be put at risk. As a result many held up The Battle of Verdun as the 'last battle'. The French General 'Petain' believed along with many others that the French must win this battle, that they will win the battle, for the consequences of losing would likely be the defeat of France. Source A is a propaganda piece, it was designed to make people believe in this 'WE must prevail' attitude, and as a result it is very useful to historians. Because it is propaganda it gives us the view that the French Government wanted the civilians to have, and it is likely that because of this many French people had this attitude. Source A reads 'We will Beat Them!'. This was on a government bonds poster and would have been designed to alter people's opinion on the subject. ...read more.

Up to here the strategy of Attrition was working, the French were obliterated, and all defences were wiped away in the face of the massive German army. Source E is an example of the effectiveness of the German strategy, the Fort Douamont was obliterated by the massed artillery and firepower the Germans were able to use against the French. Source E is a photo of fort Duamont before and after the German bombardment, it was produced in 1916, which means it could have been propaganda from the Germans, but this is unlikely. This helps to answer the question because it demonstrates the utter destruction that the German artillery was able to do and shows gives an indication to the amount of deaths they could have caused, and how affective the strategy of attrition could be. The Latter half of Source F also agrees with this, " A major consequence fro France was that it brought her army to the brink of self-destruction". This shows how deadly the German attack was and how big an effect it had on the French. Source F could have been subject to a bias because it was written by a British author, but this is unlikely as it was written eighty one years after the event and as such bias's based on the war are likely not to be present. Also it was written by a historian and where as historians are not impassive to being biased it is less likely than otherwise. This source is useful because it shows what affect the battle had on the Germans, and how that in the long run, the strategy of attrition was ineffective as it "Deprived her (Germany) of the commodity without which no country can fight: manpower". Source E gives an alternative theory to the sources that tell us of the effectiveness of the German army. It shows the amount and capacity of the French weaponry and it gives the impression that the Germans made an error of judgement when ...read more.

Source I is very unlikely to be biased as it was written eighty-two years after the ending of the war, and because it was written by a historian. The Source says that the strategy of attrition was not necessarily Source A is also very similar, it shows that French morale at home at least, and they would beat the Germans, no matter what. "We will beat them!" From this source I can also draw that the error of judgement in regards to the German strategy of attrition was to underestimate French morale. Source A is a government ordered poster which is propaganda, it is designed to increase the morale of the French public, but it does show the feeling that the French public would have had and because of this is useful in proving that that attrition was an error of judgement by the Germans. Sources A to K between them neither manage to prove that the German strategy of attrition at Verdun was an error of judgement or that it wasn't, some sources argue that it the failure of the attack was completely down to an error of judgement, source I, source F, source C and source B. Other sources say that it failed for a variation of different reasons, sources A,D,E,G and H and source J seems to believe that the battle of Verdun was a German victory despite the beliefs of modern historians and the facts presented to the author which say otherwise (though I know from my own knowledge that all sources by this author are subject to 'original' views that the majority of modern historians disagree with). The German plan of attrition was dependant on a great number of things coming together, and in exactly the right conditions, carried out correctly, and with the right responses from the enemy it could have worked very well, but I know, and the sources suggest that different errors of judgement, and other factors which the German could not control came onto play to make the plan a failure. Jack Stenner 11T ...read more.