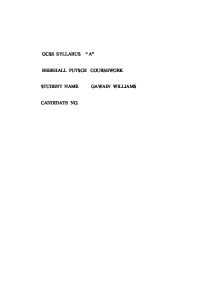 GCSE SYLLABUS " A" BEERHALL PUTSCH COURSEWORK STUDENT NAME GAWAIN WILLIAMS CANDIDATE NO. CONTENTS PAGE 1 ) QUESTION ONE : What can you learn from source A about the events in the Burgerbrawkeller on the evening of 8th of November 1923. PAGE 2) QUESTION TWO a): In what ways do the sources give a different impression of events ? PAGE 3) QUESTION TWO b): How do you explain the differences between the sources ? PAGE 4) QUESTION THREE) Which of these two sources is more useful in helping you to understand the events in Munich on 8th November 1923 ? PAGE 5) QUESTION FOUR) In what ways do these sources agree and disagree about the events in Munich on 8/9th November 1923? PAGE SIX)QUESTION FIVE) Use these sources to explain what image of himself and the n**i Party Hitler was trying to put across. PAGE SEVEN AND EIGHT) QUESTION SIX) " The events in Munich on 8/9 November 1923 greatly increased the influence of Hitler and the n**i Party in Germany." Use the sources and your own knowledge to explain whether you agree with this view of the Munich Putsch. ...read more.

He also states how troops " are marching on Munich under the swastika " (n**i symbol) This means that Hitler and the n**i Party believed that the Weimar Republic (government in power) were not dealing with the problems facing Germany at this time, such as depression, mass unemployment, and hyper inflation. America had given Germany two loans (Dawes and Young plan) to help their economy, but later when the Wall Street crash happened America demanded the money back from Germany. Which Germany could not afford to repay. This speech was probably propaganda and may have been released to the public purely to state Hitler's future aims for Germany and his "vow". Even though everybody was taken in by Hitler's powerful speeches some Nazis still managed to steal "148 sets of cutlery" This may also be propaganda (source C) that was released by n**i enemies such as the Communist to damage the image of the Nazis. QUESTION FOUR Sources F G and H (all written) agree and disagree about the events in Munich on 8th and 9th November 1923. All sources agree that Hitler fell to the floor and fled the Putsch but the reasons why are very different. ...read more.

. This is shown at the Beerhall Putsch (Burgerbraukeller ) since Hitler had to "elbow his way through the crowd" and jump onto a table and "fire two shots into the ceiling" to gain the attention of the Bavarian government. After the Beerhall Putsch many Germans saw Hitler was trying to do something about the state of Germany and the ineffectiveness of the Weimar government. Whilst Hitler was serving " nine months" of his seven year prison sentence for his Putsch in Landscape prison, he wrote a book called "Mein Kampf" which means " My Struggle". After the Putsch many people saw Hitler as a leader that Germany needed . This is evident in source E. He had a reason for everything that went wrong and a plan to fix it. This is evident in source D and J .Hitler also spoke how God had chosen him to lead Germany. This helped him achieve votes. However the Putsch may have harmed the Nazis for a short time because people may have seen the Nazis as thugs .One believes it helped the Nazis because they would get a lot of publicity in the papers Hitler's time in prison also gave him the time to reorganize his campaign ideas as in source K "pursue another ........". ...read more.