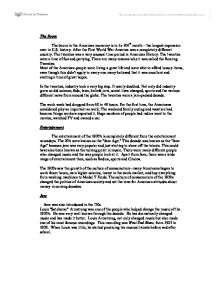 The Boom in the US. There are many reasons why it was called the Roaring Twenties.

The Boom The boom in the American economy is in its 106th month - the longest expansion ever in U.S. history. After the First World War America was a completely different country. The twenties was a very unusual time period in American History. The twenties were a time of fun and partying. There are many reasons why it was called the Roaring Twenties. Most of the American people were living a great life and were able to afford luxury items, even though this didn't apply to every one many believed that it was excellent and exciting a time of great hopes. In the twenties, industry took a very big step. It nearly doubled. Not only did industry grow so did science, fads, laws, beliefs, arts, social lives changed, sports and the various different news from around the globe. The twenties were a jam-packed decade. The work week had dropped from 60 to 48 hours. For the first time, the Americans considered play as important as work. The weekend family outing and vacation had become things workers expected it. Huge numbers of people had radios went to the movies, watched TV and owned a car. Entertainment The entertainment of the 1920's is completely different from the entertainment nowadays. The 20's were known as the "Jazz Age." This decade was known as the "Jazz Age" because jazz was very popular and just starting to show off the talents. This could have also been known as the turning point in music. ...read more.

It was good timing on their part because in this decade they got to watch the exploits of Jack Dempsey, Man O' War, The Four Horsemen of Notre Dame, Red Grange, Big Bill Tilden and Suzanne Lenglen, Eddie Shore and Howie Morenz, Bobby Jones and the biggest of them all Babe Ruth. What a decade it was. So I thought I would go back and replay some of the famous games, series and events that these legends of their sport played in. I thought it would be a fun and interesting way to look back at these greats in time when it seems we all are looking back as this century is nearing its end. The 1920s were called the Golden Age of Sports. From the very beginning of the decade extraordinary athlete/heroes appeared in virtually every sport-baseball, football, tennis, golf and the Olympic sports. Babe Ruth, Ty Cobb, Lou Gehrig, Red Grange, Knute Rockne, Helen Wills, Bill Tilden, Bobby Jones, Walter Hagen, Jack Dempsey, Benny Leonard, and Tommy Hitchcock established records and, in the process, became legends. The most popular sport in the twenties was usually baseball and soccer. Cinema In the period immediately following World War I, movies were a popular escape into fantasy for many people, and the film industry boomed. The boom was helped by the hyperinflation of the early 1920s. This enabled film makers to borrow money in Papiermarks which would be vastly devalued by the time it had to be repaid. ...read more.

with "clan. It was at first a humorous social club centering on practical jokes and hazing rituals but soon spread into nearly every Southern state, launching a "reign of terror" against Republican leaders both black and white. Those assassinated during the campaign included Arkansas Congressman James M. Hinds, three members of the South Carolina legislature, and several men who had served in constitutional conventions. From 1866 to 1867, the Klan began breaking up black prayer meetings and invading black homes at night to steal firearms. Some of these activities may have been modeled on previous Tennessee vigilante groups such as the Yellow Jackets and Redcaps. In an 1867 meeting in Nashville, an effort was made to create a hierarchical organization with local chapters reporting to county leaders, counties reporting to districts, districts reporting to states, and states reporting to a national headquarters. The proposals, in a document called the "Prescript," were written by George Gordon, a former Confederate brigadier general. The Prescript included inspirational language about the goals of the Klan along with a list of questions to be asked of applicants for membership, which confirmed the focus on resisting Reconstruction and the Republican Party. The applicant was to be asked whether he was a Republican, a Union Army veteran, or a member of the Loyal League; whether he was "opposed to n***o equality both social and political;" and whether he was in favor of "a white man's government," "maintaining the constitutional rights of the South," "the reenfranchisement and emancipation of the white men of the South, and the restitution of the Southern people to all their rights," and "the inalienable right of self-preservation of the people against the exercise of arbitrary and unlicensed power. ...read more.