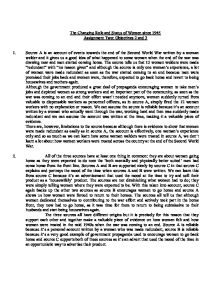 The Changing Role and Status of Women since 1945

The Changing Role and Status of Women since 1945 Assignment Two: Objectives 2 and 3 1. Source A is an account of events towards the end of the Second World War written by a woman welder and it gives us a good idea of what happened to some women when the end of the war was drawing near and men started coming home. The source tells us that 12 women welders were made "redundant" with "no reason given" and although the source is only one woman's experience, a lot of women were made redundant as soon as the war started coming to an end because men were promised their jobs back and women were, therefore, expected to go back home and revert to being housewives and mothers again. Although the government produced a great deal of propaganda encouraging women to take men's jobs and depicted women as strong workers and an important part of the community, as soon as the war was coming to an end and their effort wasn't needed anymore, women suddenly turned from valuable to dispensable workers as personnel officers, as in source A, simply fired the 12 women workers with no explanation or reason. We can assume the source is reliable because it's an account written by a woman who actually went through the war, working hard and then was suddenly made redundant and we can assume the account was written at the time, making it a valuable piece of evidence. There are, however, limitations to the source because although there is evidence to show that women were made redundant as easily as in source A, the account is effectively, one woman's experience only and so as much as we can learn how some women welders were treated in source A, we don't learn a lot about how women workers were treated across the country at the end of the Second World War. ...read more.

Although feminists had obviously managed to make an impact of some sort, as both sources F and G suggest, the laws passed didn't have the desired effect on society. There are several reasons to why the regulations didn't really work but the most significant, which is also reflected by the sources, is probably the fact that although you can pass a law in a few days, you can't change people's attitudes in so little time. In fact, according to the sources, 10 years wasn't enough time as source G was written in the 1970s and source F was written in the 1980s but they both express a feeling of pessimism towards the way the new laws were establishing themselves in society. The first problem, not mentioned in the sources, was that there were loopholes in the laws which meant that parsimonious employers would give men and women jobs with different names when, effectively, the men and women were doing the same job. This way, the employer avoided paying women the same amount as men. Furthermore, women with part-time jobs didn't benefit at all from these new laws and so a large majority of women remained completely unaffected until the 1990s when laws for part time workers were passed. Even young women and girls had little hope of benefiting from these new laws. Although the Sex Discrimination Act was passed, girls continued to study different subjects to boys at school as girls were encouraged to study History and English whilst boys did Maths and Sciences. As source F states: "New laws and regulations don't bring social change. The most they can do is to create a climate more favourable" and this brings me on to the next point. Laws can change but it's hard to change mindsets and attitudes especially when the young ie// school children, are still been differentiated between according to their sex. ...read more.

residences where they could get away from abusive husbands with their children and cases that concern sex discrimination and such are taken very much seriously nowadays. There is however, a downside to all this equality fighting. Only very recently a man took a Sex Discrimination case to court claiming that is his female colleagues weren't required to wear smart suits all the time and he therefore shouldn't have to wear a tie, and he won the case. In fact, there almost seems to be a role reversal as men seem to be becoming more vulnerable to suffering discrimination and abuse from women. Cases of husband beatings are being reported more and more often and women almost seem to be getting quite powerful quicker than they had ever done before, but there is a price for equality. An example is that of the pension ages being changed. By 2020 women will retire at 65 rather than 60 to match their male colleagues. In conclusion, the sources are quite limitative in what they tell us about women's progress through the last 80 years since they are all pessimist or they all show stereotypes of women. There are no sources showing a piece of positive feminist writing or any newspaper clippings of how much uproar feminists were causing with their unique demonstrations. Women have moved on from being second class citizens. I think it's not appropriate to call women in Britain that anymore since they have fair opportunities in life compared to men and compared to other countries, equality has been reached beyond belief on all aspects, including fashion for example: women today can wear what they like in this country but it's very different in countries such as Iran or Iraq. In terms of changes to the law, feminists did very little since only governments can change the law but feminism definitely resulted in a change of attitudes as women are now given opportunities in all fields and slowly, equality is being reached. Word count: 3,131 ...read more.