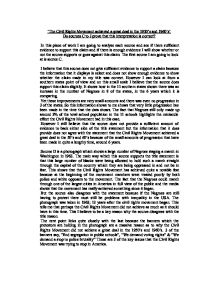 'The Civil Rights Movement achieved a great deal in the 1950's and 1960's' Do sources C to J prove that this interpretation is correct?

'The Civil Rights Movement achieved a great deal in the 1950's and 1960's' Do sources C to J prove that this interpretation is correct? In this piece of work I am going to analyse each source and see if there sufficient evidence to support this claim and if there is enough evidence I will show whether or not the source supports or goes against this claim. The first source I am going to look at is source C. I believe that this source does not give sufficient evidence to support a claim because the information that it displays is select and does not show enough evidence to show whether the claim made in my title was correct. However I can look at from a southern states point of view and on this small scale I believe that the source does support this claim slightly. It shows how in the 11 southern states shown there was an increase in the number of Negroes in 8 of the states, in the 6 years which it is comparing. Yet these improvements are very small amounts and there was even no progression in 3 of the states. So this information shows to me shows that very little progression has been made in the time that the data shows. The fact that Negroes still only made up around 3% of the total school population in the 11 schools highlights the miniscule effect the Civil Rights Movement had in this case. However I still believe that the source does not provide a sufficient amount of evidence to back either side of the title statement but the information that it does provide does not agree with the statement that the Civil Rights Movement achieved a great deal in the 50's and 60's because of the small amounts of progression that have been made in quite a lengthy time, around 6 years. ...read more.

Because the Negroes were standing up to the whites it shows that the Civil Rights Movement has had some success because before the movement began the Negroes would not of been able to stand up to the whites in this way. But the main way that the source disagrees with the title statement is that the Negroes have not changed their opinions of the whites. Although the Negroes want the whites to change their opinion of themselves, I believe that if they don't change their opinions also then no progress can be made. Because of the lack of change I believe this shows how the Civil Rights Movement did not achieve a great deal in the 1950's and 60's. However this source is only the views of 1 set of people. The source talks of 3 other areas where riots have taken place but apart from this it is unknown whether or not this is the view of the majority of Negroes or a minority. So the source does not give sufficient evidence but the evidence it does give shows quite a balanced argument both for and against the title statement but I believe it just shows an against argument overall. Source H is article talking about the lead up and effect of Martin Luther King's assassination. It was written in 1998 so had the benefit of hindsight and was written for British school textbooks. Again this source gives a very balanced argument on whether or not it agrees with the statement that the Civil Rights Movement achieved a great deal in the 50's and 60's. The for argument is that it shows how most public opinion had changed to support the Civil Rights Movement and lists some of the successes of individual Negroes such as one who was voted as Mayor of Los Angels. ...read more.

This quote also came from the mouth of a police chief who was supposed to be protecting from the Negroes from the mob of angry whites trying to harm the Negroes. This quotation in my opinion illustrates that even though the Civil Rights Movement had been working for equality for 13 years the opinions of whites all over America but mainly focused in the south, had not changed since the movement began. The abuse the Negroes also had to injure was also a demonstration of the lack of change in opinion of the white Americans. But, I believe that this source does not contain enough evidence to really pick sides on whether or not it agrees with the title statement. The main argument against it is only shown as the opinion of one man and from this source we cannot see if this was the general feeling or just this mans own belief. And the fact that 13 years into the Civil Rights Movement Negroes still had to protest over things like trying to change the attitudes of police to them. In my opinion that shows that the movement had not achieved a great deal. So because of the lack of sufficient evidence I believe that it is difficult to conclude whether or not the source agrees or disagrees with the statement that the Civil Rights Movement achieved a great deal in the 1950's and 1960's. So now that all of the 8 sources have been analysed to show whether or not they agree or disagree with the title statement, the conclusions that I can make is that the majority of them do not provide sufficient evidence to support either opinion and the sources which have enough evidence show both arguments for and arguments against the statement in the title. ...read more.