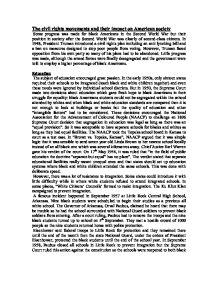 The civil rights movements and their impact on American society

The civil rights movements and their impact on American society Some progress was made for black Americans in the Second World War but their position in society after the Second World War was clearly of second-class citizens. In 1948, President Truman introduced a civil rights plan including an anti lynching bill and a ban on measures designed to stop poor people from voting. However, Truman faced opposition from his own party so many of his plans had to be abandoned. Little progress was made, although the armed forces were finally desegregated and the government were told to employ a higher percentage of black Americans. Education The subject of education encouraged great passion. In the early 1950s, only sixteen states required their schools to be integrated (teach black and white children together) and even these needs were ignored by individual school districts. But in 1950, the Supreme Court made two decisions about education which gave fresh hope to black Americans in their struggle for equality: black Americans students could not be segregated within the school attended by whites and when black and white education standards are compared then it is not enough to look at buildings or books but the quality of education and other "intangible factors" had to be considered. These decisions encouraged the National Association for the Advancement of Coloured People (NAACP) to challenge an 1896 Supreme Court decision that segregation in education was legal as long as there was an "equal provision". ...read more.

In December 1958 a national opinion poll in the USA placed Faubus in the top ten of most admired men in the USA. The Montgomery bus boycott Both the Brown and Little Rock case had shown that progress could be made if the law was involved although there were other methods. A bus boycott in Montgomery, Alabama showed that the power that the black Americans had if they worked together. In Alabama, as in many Southern states, blacks were only allowed seats at the rear of the buses and had to give up their seats if a white person had nowhere to sit. In 1955, Rosa Parks took a place in the middle of the bus and refused to give it up when asked to do so by a white person. She was ejected from the bus and arrested. Her arrest was a spark that black Americans waited for and many historians see the true meaning of the civil rights movements growing from the refusal of Rosa Parks. This incident causes a tremendous outrage in the black community. Immediately, black leaders met to plan a boycott of the bus company. A local Baptist minister named Martin Luther King lead the protest under the strong influence of Mohandas Gandhi. King requested all blacks to avoid violence and to show their opposition to racial discrimination by peacefully practicing civil disobedience against the laws that they though were wrong. ...read more.

was determined to confirm that the Supreme Court's decision to integrate bus stations and buses was enforced. Throughout the summer of 1961, members of this group, known as the "Freedom Riders" were arrested but they achieved their goal of gaining huge publicity. By the end of summer 1961, the Interstate Commerce Commission (a body set up to regulate trade and business between states) announced that that there will be no segregation in bus stations and terminals. President Kennedy was keen to bring about improvements for black Americans and his brother, Robert Kennedy, the Attorney General, had meetings with the main civil rights groups SNCC, CORE and NAACP in the summer of 1961. Together they constructed the Voter Education Project, which aimed to get more blacks to register to vote and use that vote. As a result, there was a large increase in the number of black voters but at a cost. Some whites carried out a policy of intimidation in which black communities sometimes found their homes and churches attacked, and individual blacks were subjected to beatings, shooting and evictions. In 1962, the city authorities at Birmingham, Alabama closed parks, playing fields and swimming pools and other public places to avoid integration. In 1963, King organised a campaign of marches and demonstrations that would confirm maximum media coverage. He was fortunate in some ways because the local police Commissioner, Eugene Bull Connor was determined to take strong action against the black campaigners. He set dogs on the demonstrators and when they refused to go away, he turned fire hoses on them. ...read more.