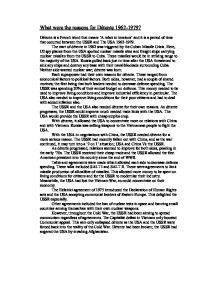 Détente is a French word that means ‘A relax in tensions’ and it is a period of time that occurred between the USSR and The USA 1962-1979.

The start of détente in 1962 was triggered by the Cuban Missile Crisis. Here, U2 spy planes from the USA spotted nuclear missile sites and freight ships carrying nuclear missiles from the USSR to Cuba. These missiles would be in striking range to the majority of the USA. Russia pulled back just in time after the USA threatened to sink any ships and destroy any base with their naval blockade surrounding Cuba. Neither side wanted nuclear war; détente was born.

Each superpower had their own reasons for détente. These ranged from economical factors to political factors. Both sides, however, had a couple of shared motives; the first being that both leaders needed to decrease defence spending. The USSR was spending 20% of their annual budget on defence. This money needed to be used to improve living conditions and improve industrial efficiency in particular. The USA also needed to improve living conditions for their poor citizens and had to deal with added inflation also.

The USSR and the USA also needed détente for their own reasons. As détente progresses, the USSR could improve much needed trade links with the USA. The USA would provide the USSR with cheap surplus crop.

With détente, it allowed the USA to concentrate more on relations with China and with Vietnam. Russia was selling weapons to the Vietnamese people to fight the USA.

With the USA in negotiations with China, the USSR needed détente for a more serious reason. The USSR had recently fallen out with China, and as the war continued, it may turn into a ‘2 on 1’ situation; USA and China Vs the USSR.

As détente progressed, relations seemed to improve for both sides, peaking in the early ‘70s. The USSR received their cheap trade and the USSR allowed the first American president into the country since the end of WWII.

Talks and agreements were made which allowed each side to decrease defence spending. These talks included SALT I and SALT II. These were agreements to limit missile production of all calibre of missiles. This allowed more money to be spent on living conditions for citizens and for the USSR to modernise their industry. Meanwhile, the USA had lost the Vietnam War, so could concentrate on their economy.

The Helsinki agreement of 1975 introduced the Declaration of Human Rights acts and the USA accepting communist borders of Eastern Europe. This delighted the USSR especially.

Other agreements included the ban of nuclear tests in space and banning small countries arming themselves with their own nuclear weapons.

However, throughout the Cold War, the USSR had been aiming to spread communism regardless of agreements. The Capitalist defeat in Vietnam only boosted Communist appeal. This aim only collapsed détente as the USA and the USSR were forced back into the reality of the Cold War. Détente had been broken; the USSR had angered the USA by invading Afghanistan.