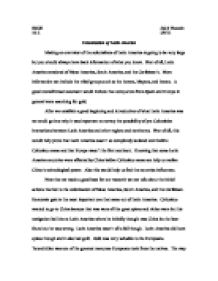 The Colonization of Latin America

BSGE Zakir Hussain 10-2 2/9/11 Colonization of Latin America Making an overview of the colonialism of Latin America is going to be very large but you should always have back information of what you know. First of all, Latin America consisted of Meso-America, South America, and the Caribbean's. More information can include the tribal groups such as the Aztecs, Mayans, and Incans. A good overall broad statement would include that conquerors from Spain and Europe in general were searching for gold. After we establish a good beginning and introduction of what Latin America was we could go into why it was important to convey the possibility of pre-Columbian interactions between Latin America and other regions and continents. ...read more.

Economic gain is the most important one that came out of Latin America. Columbus wanted to go to China because that was were all the great spices and riches were but his navigation led him to Latin America where he initially thought was China but he later found out he was wrong. Latin America wasn't all a fail though. Latin America did have spices though and it also had gold. Gold was very valuable to the Europeans. Tenochtitlan was one of the greatest resources Europeans took from the natives. The way the Europeans took it was very important because they took it by force but also the disease they carried wiped out many natives trying to protect it. ...read more.

For example, in 1518,the year the Spaniards forced the first ship of Africans to the West Indies. This was the beginning of the "Triangular Trade" or the "Trans-Atlantic Slave Trade." 15-20 million men, women and children died during the voyage across the Atlantic Ocean. After economic gain decreased a little bit religious power started kicking in. In 1494, Pope Alexander the IV created the "Line of Demarcation" by signing the treaty of Tordesilla. Latin America was now divided between Spain and Portugal. In Latin America it was a race of followers. The more people who convert, the more power conquistadors and the church would have. Also it was them saying that Christianity was the only "right religion". Now this would make you think that the Spanish and Portuguese were more superior than the natives. ...read more.