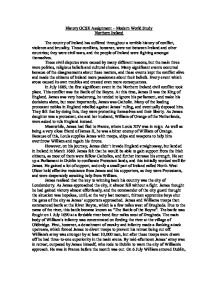 The country of Ireland has suffered throughout a terrible history of conflict, violence and brutality. These conflicts, however

History GCSE Assignment - Modern World Study Northern Ireland The country of Ireland has suffered throughout a terrible history of conflict, violence and brutality. These conflicts, however, were not between Ireland and other countries; they were civil wars, and the people of Ireland were fighting amongst themselves. These civil disputes were caused by many different reasons, but the main three were politics, religious beliefs and cultural choices. Many significant events occurred because of the disagreements about these matters, and these events kept the conflict alive and made the citizens of Ireland more passionate about their beliefs. Every event which arose caused its own troubles and created even more consequences. In July 1689, the first significant event in the Northern Ireland civil conflict took place. This conflict was the Battle of the Boyne. At this time, James II was the King of England. James was very headstrong, he tended to ignore his parliament, and make his decisions alone, but most importantly, James was Catholic. Many of the leading protestant nobles in England rebelled against James' ruling, and eventually deposed him. They felt that by doing this, they were protecting themselves and their liberty. As James daughter was a protestant, she and her husband, William of Orange of the Netherlands, were asked to rule England instead. Meanwhile, James had fled to France, where Louis XIV was in reign. As well as being a very close friend of James II, he was a bitter enemy of William of Orange. ...read more.

This just made problems worse, as money became even tighter and there was more competition and, because of this, more fighting. The continued troubles in Ireland led to a new war between the Irish and the English, which lasted from 1919 to 1921. During this Anglo-Irish war, terrible crimes were committed by both the Blacks and Tans and the IRA. The Prime Minister at the time, David Lloyd George, became desperate for a solution, and so he sent representatives of Sinn Fein to London to have discussions with the British Government. As a result of these discussions, the Government of Ireland Act and the Anglo-Irish Treaty were created. The Government of Ireland Act divided Ireland into two territories; Southern Ireland and Northern Ireland. Both were self-governing, except in areas specifically reserved to the Parliament of the United Kingdom: chief amongst these were matters relating to the Crown, to defence, foreign affairs, international trade, and currency. Southern Ireland was to be all of Ireland except for "the parliamentary counties of Antrim, Armagh, Down, Fermanagh, Londonderry and Tyrone, and the parliamentary boroughs of Belfast and Londonderry" which were to constitute "Northern Ireland". This partitioning of Ireland was an attempt by the British Government to reconcile the demand by Irish nationalists for home rule and that by Irish unionists that home rule not be conceded. Northern Ireland as defined by the Act, amounting to six of the nine counties of Ulster, was seen as the maximum area within which unionists could be expected to be in a majority. ...read more.

However, I feel the most influential were the Battle of the Boyne and the Partition of Ireland. The Battle of the Boyne was the starting point of all the conflicts. It embedded hatred deep into the population of Ireland, and this hasn't been forgotten, even to this day. All of the following events are 'ripples in the pond', worsening each time. I also feel that the Partition of Ireland had a huge effect on the violence and conflicts. The partition created a 'final divide', and highlighted even further the extent to which the Protestants and Catholics despised each other. As well as heightening the hatred which was present, new hatred was created. Discrimination towards Catholics was made much worse, and although it isn't as serious today, is still present. More political groups were created, meaning more violence was created as more and more people became involved with the protests. The established political groups had stronger feelings and they became more passionate about their beliefs and views. This, once again, caused more violence. It also heightened the feeling of Protestant rule over the Catholics in Northern Ireland, which started battles for the Civil Rights of Catholics. This led to further violence and conflicts. For these reasons, I feel the partition of Ireland is a particularly key events in the causes to Irelands conflict, with the greatest consequences, as without it, many of the following events, such as petrol bombs and 'no-go' areas being created, wouldn't have taken place. ...read more.