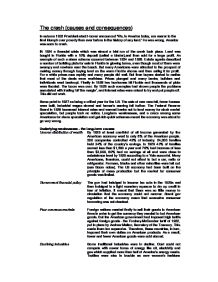 The crash (causes and consequences of the Wall Street Crash)

The crash (causes and consequences) In autumn 1932 President-elect Hoover announced 'We, in America today, are nearer to the final triumph over poverty than ever before in the history of any land.' He was wrong. America was soon to crash. IN 1924 a financial crisis which was almost a trial run of the crash took place. Land was bought in Florida with a 10% deposit (called a binder),and then sold for a large profit. An example of such a share scheme occurred between 1924 and 1926. Estate agents described a number of building plots for sale in Florida in glowing terms, even though most of them were swampy and nowhere near the beach. But many Americans were attracted to the prospect of making money through buying land on the warm Florida shores and then selling it for profit. For a while prices rose rapidly and many people did well. But then buyers started to realise that most of the deals were worthless. Prices plunged and many banks, builders and individuals went bankrupt. Finally in 1926 two hurricanes hit Florida and thousands of plots were flooded. The boom was over. By 1929 such examples had shown people the problems associated with trading 'off the margin', and interest rates were raised to try and put people off. This did not work. Some point to 1927 as being a critical year for the US. The sale of new cars fell, fewer houses were built, industrial wages slowed and farmer's earning fell further. The Federal Reserve Board in 1928 increased interest rates and warned banks not to lend money for stock market speculation, but people took no notice. Long-term weaknesses, and a craze among some Americans for share speculation and get-rich-quick schemes meant the economy was about to go very wrong. Underlying weaknesses - the long-term causes Uneven distribution of wealth By 1929 at least one-third of all income generated by the American economy went to only 5% of the American people. ...read more.

A popular joke at the time read 'Did you hear the one about the man who rented a hotel room. The clerk asked him if it was for jumping or sleeping?' End to confidence Despite the relatively low number of players on the stock market, it symbolised prosperity and so when it crashed, so did confidence in the economy in general. This in turn led to a run on the banks and lack of investment. When it was discovered that the House of Morgan kept a preferred list of influential customers to whom it sold securities below market price, the belief of honour in corporate life flew out of the window. Bank failures As the effects of the Crash took hold, millions of savers wanted their money back from the banks either to pay back debts or because they needed the money now. But the banks had problems of their own. Many had lent unwisely to stockbrokers, unsound companies and private investors. When they called their debts in, many borrowers could not pay them back. The smaller banks were the first to go bankrupt. Within three years, thousands of larger concerns had also failed. By 1933, the American banking system had virtually collapsed. About 15% of people's life savings had been lost (there was no system of insuring their deposits) and millions of Americans had withdrawn their money and overseas investors had withdrawn their gold deposits. Without banking, business confidence, and investment was at a standstill so no recovery was possible. Bank failures 1929 1930 1931 1933 642 1,345 2,289 over 4,000 Hoovervilles, shanty towns Over a million of the unemployed had become homeless because they could not pay their rents or mortgages. Banks had taken possession of their homes. Now they felt anger and humiliation and blamed Hoover's government. They lived in shanty towns on the outskirts of cities. They built their new homes from packing cases, scrap metal, sacking, wood, old car seats and burnt engine oil for warmth on cold nights. ...read more.

Congress allocated $47m after the 1930/1drought but even that was to be offered as loans. Not only that, Hoover was not helped by other factors: state governments would not keep up their spending, farmers would not cut production, employers sacked people and there was so little confidence in the economy that people would not take out loans or invest. The Republican belief in a balanced budget also stopped them doing more as did other economic conventional wisdom of the day. Also, the gov had limited instruments available to it. There was no national education, police or proper federal bureaucracy. Very few people paid federal income tax. The only federal agency in most towns was the post office and federal expenditure 1929 was 2.5% of GNP and a third that of state governments. Even a 50% rise in the federal budget would have been a ripple. There was no gov bank and no control over the monetary authorities or Federal Reserve Bank which supervised private banking. Thus there was no gov department to channel funds for welfare, and hence in 1932 when surplus wheat was released it had to be done through the Red Cross. The tradition whereby communities looked after residents in distress was the product of agricultural society, when hardship could be expected to be local and contemporary. Year Economic factors and statistics Government action 1929 Unemployment 3.2% Agricultural Marketing Act GNP $203.6 billion Growth rate 6.7% October 1929, price of shares fell by $14 billion 1930 Unemployment 8.9% Voluntarism, e.g. conferences GNP $1 83.5 billion to try to dissuade business Growth rate -9.6% from laying off workers. Serious drought SE of Rockies Hawley Smoot Tariff. $49 million given in loans to victims of the drought. 1931 Unemployment 16.3% Moratorium on collection of GNP $169.5 million war debts for 18 months. Growth rate -7.6% National Credit Corporation set up with capital fund of $500 million. 1932 Unemployment 24.1% Federal Home Loan Bank Act. GNP $144.2 billion Reconstruction Finance Growth rate -14.7% Corporation set up with funds of $2 billion. Emergency Relief and Construction Act. Dispersal by force of 'Bonus Army'. ...read more.