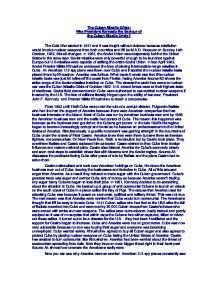 The Cuban Missile Crisis: Was President Kennedy the Saviour of the Cuban Missile Crisis? The Cold War started in 1917 and it was fought without violence because retaliation would involve nuclear weapons from both countries and it'll be M.A.D. However on Sunday 14th October, 1962, this all changed. In 1962, the Soviet Union was desperately behind the United States in the arms race. Soviet missiles were only powerful enough to be launched against Europe but U.S missiles were capable of striking the entire Soviet Union. In late April 1962, Soviet Premier Nikita Khruschev concieved the idea of placing intermediate-range missiles in Cuba. An American U-2 spy plane was flown over Cuba and it spotted the nuclear missile basis placed there by Khruschev. America was furious. What made it worst was that this nuclear missile basis was just 90 miles off the coast from Florida, facing America.Source B2 shows the strike range of the Soviet missiles installed on Cuba. The closest the world has come to nuclear war was the Cuban Missile Crisis of October 1962. U.S. armed forces were at their highest state of readiness. Soviet field commanders in Cuba were authorized to use tactical nuclear weapons if invaded by the U.S. The fate of millions literally hinged upon the ability of two men, President John F. Kennedy and Premier Nikita Khrushchev to reach a compromise. From 1952 until 1958 Cuba was under the rule of a corrupt dictator, Fulgencio Batista who had the had the support of America bacause there were American companies that had business interests on the island. Most of Cuba was run by American business men and by 1958 the American business men and the mafia had control of Cuba. The reason this happened was because as the business men got richer, the Cubans got poorer. In the late 1950's his regime began to become increasingly corrupt and brutal so he bacame an embarrasement to the United States of America. ...read more.

In the meantime, France's plans on invasion of Cuba was drawn up in the White House and all key officials were moved out of Washington D.C. as a precaution. 52 bombers, armed with nuclear bombs, flew patrols. Rules for stopping and boarding the Russian ships were agreed between politicians and America's naval forces. America was supported in their actions by their allies in South America and Europe. These actions also suggested to the Soviets that the Americans were contemplating launching a nuclear weapon on or near the Soviet Union. This action had the desired effect. The Soviet ships either stopped dead in the water or turned around. The Soviets had not entered direct conflict but the crisis was not over. U-2 photographs were showing the missile basis almost ready. On Friday, 26th October Kennedy recieved a letter from Khrushchev. He offered to remove the missiles from Cuba if Kennedy promised not to invade Cuba and end the blockade. Khrushchev also made it clear that he wanted to avoid the horrors of nuclear war. This letter offered the first hope of a peaceful solution to the situation:- "You and I should not now pull on the ends of the rope in which you have tied a knot of war, because the harder you and I pull, the tighter the knot will become. And a time may come when this knot is tied so tight that the person who tied it is no longer capable of untying it, and then the knot will have to be cut. What that would mean I need not explain to you, because you yourself understand perfectly what dreaded forces our two countries possess. I propose we, for our part, will declare that our ships bound for Cuba are not carrying any armaments. You will declare that the United States will not invade Cuba with its troops and will not support any other forces which might intend to invade Cuba. ...read more.

That step he said, was the President ordering the invasion of Cuba. What the military didn't know then was that they had grossly underestimated Soviet and Cuban force strength. Military intelligence calculated 10,000 Soviet troops on the island plus an additional 100,000 Cubans. We now know that the actual numbers were much higher. The Soviets had 43,000 combat-ready soldiers and Castro had mobilized 270,000 Cubans to fight. Plans for the American invasion called for a first day air strike consisting of 1,080 sorties and an amphibious landing of 180,000 troops. Those troops would have been surprised by the strength of the resistance they found on the island. Had Kennedy gone ahead with the invasion, casualties on both sides would have been much higher. Furthermore, EXCOM was also unaware of the tactical nuclear weapons stationed along Cuba's shore. Khrushchev had also given a standing order to his generals that if he couldn't be reached in the event of an invasion, they had the authority to launch the battlefield nuclear weapons. If Kennedy had invaded, the outnumbered Soviets would have used their nuclear weapons and then Kennedy would have had no choice but to retaliate with American nuclear devices. The response would likely have been an attack on Soviet soil. However, we can say that all three men prevented the Cuban Missile Crisis from turning into World War Three even thought it was only two of them that had started it though these men had been caught up in a Cold War that had been developing over many decades. Eventually, the three men established peace and the crisis ended with a positive outcome. However, on November 22nd, 1963 President Kennedy was assassinated in Dallas, Texas. Eleven months later Premier Khrushchev was removed from office by communist hard liners. You can't help but wonder what would have happened if these two men had stayed in power. Perhaps the same two people who brought us so close to nuclear war, now changed by that experience, could have brought us far from it. ...read more.