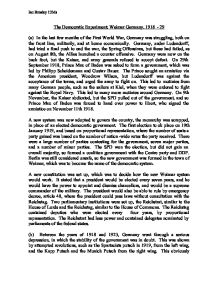 The Democratic Experiment: Weimar Germany, 1918 - 29 (a) In the last few months of the First World War, Germany was struggling, both on the front line, militarily, and at home economically. Germany, under Ludendorff, had tried a final push to end the war, the Spring Offensives, but these had failed, as on August 8th, the Allies launched a counter offensive. Germany were now on the back foot, but the Kaiser, and army generals refused to accept defeat. On 29th September 1918, Prince Max of Baden was asked to form a government, which was led by Philipp Scheidemann and Gustav Bauer. The Prince sought an armistice via the American president, Woodrow Wilson, but Ludendorff was against the acceptance of the terms, and urged the army to fight on. This led to mutinies from many German people, such as the sailors at Kiel, when they were ordered to fight against the Royal Navy. This led to many more mutinies around Germany. On 9th November, the Kaiser abdicated, but the SPD pulled out of the government, and so Prince Max of Baden was forced to hand over power to Ebert, who signed the armistice on November 11th 1918. ...read more.

This was shown by attempted revolutions, such as the Spartacists putsch in 1919, from the left wing, and the Kapp Putsch and the Munich Putsch from the right wing. This obviously meant that there was unrest in Germany and many people disliked the new Weimar regime. The Weimar regime got off to a bad start, as the harsh Treaty of Versailles was imposed on Germany. Many Germans felt frustrated by the harsh terms, and the government was not popular for signing it. The treaty also led to ideas from right wing groups of the "Stab in the back theory", where they blamed the government for signing the treaty and not continuing the war. So from an early start, Weimar lacked support from the public, which was not good for the future stability of the government, as people may start turning to extreme groups. Although the chancellor Scheidemann tried to disassociate the government with the signing of the treaty by resigning, Germany was eventually forced to sign it. The treaty led to many difficulties in the following years, Germany had lost 13% of her territory, and was split in two, but the main problem to the government was the reparations. ...read more.

International attitudes towards Germany did not help Weimar, because between 1918 and 1923, the Allies still did not trust Germany, even though it was now a democracy. This was shown by the Treaty of Versailles and the French invasion of the Ruhr, which caused Germany to be in huge economic difficulties, and may have been a cause of the attempted revolutions. Overall, it was the Treaty of Versailles which was the main cause of political instability, as the harsh terms left Germany crippled and many people wanting revenge. people blamed the government for signing the Treaty, which was not good for the future of Weimar, as many people would turn to more extreme governments. Other factors were to blame for political problems, such as the system, but it was the Allied nations who did more damage to Weimar, setting the harsh Treaty of Versailles, invading the Ruhr. This put Germany in economic trouble and left many people on the streets, in poverty, which obviously led to a lack in confidence for the Weimar regime, which is why revolutions were attempted, and the Germany was generally politically unstable. Ian Brealey 12Ms ...read more.