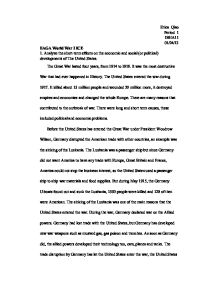 The Effects of World War I on the USA.

Erica Qiao Period 1 IBHA11 01/24/12 EAGA World War I ICE 1. Analyze the short-term effects on the economic and social (or political) developments of The United States. The Great War lasted four years, from 1914 to 1918. It was the most destructive War that had ever happened in History. The United States entered the war during 1917. It killed about 13 million people and wounded 20 million more, it destroyed empires and economies and changed the whole Europe. There are many reasons that contributed to the outbreak of war. There were long and short term causes, these included political and economic problems. Before the United States has entered the Great War under President Woodrow Wilson, Germany disrupted the American trade with other countries, an example was the sinking of the Lusitania. ...read more.