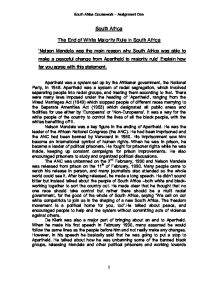 The End of White Majority Rule in South Africa Coursework

South Africa The End of White Majority Rule in South Africa 'Nelson Mandela was the main reason why South Africa was able to make a peaceful change from Apartheid to majority rule' Explain how far you agree with this statement. Apartheid was a system set up by the Afrikaner government, the National Party, in 1948. Apartheid was a system of racial segregation, which involved separating people into racial groups, and treating them according to that. There were many laws imposed under the heading of 'Apartheid', ranging from the Mixed Marriages Act (1949) which stopped people of different races marrying to the Separate Amenities Act (1953) which designated all public areas and facilities for use either by 'Europeans' or 'Non-Europeans'. It was a way for the white people of the country to control the lives of all the black people, with the whites benefiting off it. Nelson Mandela was a key figure in the ending of Apartheid. He was the leader of the African National Congress (the ANC). He had been imprisoned and the ANC had been banned by Verwoerd in 1960. His imprisonment saw him become an international symbol of human rights. When he was in prison, he became a leader of political prisoners. He fought for prisoner rights while he was inside, keeping up constant campaigns for prison improvements. He also encouraged prisoners to study and organized political discussions. The ANC was unbanned on the 2nd February, 1990 and Nelson Mandela was released from prison on the 11th of February, 1990. ...read more.

That also caused South Africa to lose a lot of needed money. The high amount of violence in South Africa was starting to make the country ungovernable. There was black on black, white on black and black on white violence, and it was growing. Civil war seemed imminent. Black cities started to 'govern' themselves, with townships having their own people's courts which the government wasn't involved in. Often, these people's courts gave out very harsh punishments, such as death by having a burning tyre placed around their neck. Townships and Homelands were descending into chaos, with people who supported different black groups and who had different ideas on how best to end Apartheid fighting and killing each other. One of the black groups was Inkatha, lead by Chief Buthelezi. He believed Zulus should be in control, and members of his party were involved in many of the clashes. Other black groups like the Pan African Congress (PAC) and Black consciousness also had different ideas about different things. For example, the PAC was for 'Black Power', whereas the ANC was multi racial. White politics also had a part to play in the ending of Apartheid. Different white people wanted different things for the party. Some people were happy with Botha's reforms, while others wanted Apartheid to be completely abolished and then some wanted Apartheid to return back to how it was originally, or even become harsher. Different views caused the National party to start splitting, and people to form their own political groups. The Afrikaner Resistance Movement (AWB) ...read more.

He was a big part of the negotiations and came up with the power sharing idea, the groups who didn't win the elections would still have a part to play in the country. Both the National party and the Zulus believed they could get the needed percentage of the vote, so agreed to take part. De Klerk was also important, as he attended many of the meetings, and agreed to the power sharing agreement. He knew his party would not get full control and that he would not be president anymore, but still agreed to it. However, I do think Mandela was the main reason for the transition actually being a peaceful one. When he came out of prison, he wasn't bitter, but wanted to work with the government for a peaceful South Africa. He was anti-violence, and encouraged people to not kill each other. He took back control of the ANC in 1989, which was multi-racial, so both blacks and whites could be members, thereby not excluding anyone or causing any resentment by whites. He knew that the ANC would win the elections, but he agreed to share his power for five years. He protected the white minority, even though it's leaders had treated him so badly for so long without any resentment, ensuring most whites being happy with the system. Therefore, although there were many other important factors in the changeover being peaceful, I believe that Nelson Mandela's role was the most important in the transition to a democratic one-man-one-vote system. ?? ?? ?? ?? South Africa Coursework - Assignment One 1 ...read more.