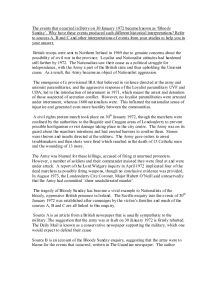 The events that occurred in Derry on 30 January 1972 became known as b****y Sunday. Why have these events produced such different historical interpretations?

The events that occurred in Derry on 30 January 1972 became known as 'b****y Sunday'. Why have these events produced such different historical interpretations? Refer to sources A, B and C and other interpretations of events from your studies to help you in your answer. British troops were sent to Northern Ireland in 1969 due to genuine concerns about the possibility of civil war in the province. Loyalist and Nationalist attitudes had hardened still further by 1972. The Nationalists saw their cause as a political struggle for independence, with the Army a part of the British state and thus upholding the Unionist cause. As a result, the Army became an object of Nationalist aggression. The emergence of a provisional IRA that believed in violence directed at the army and unionist paramilitaries, and the aggressive response of the Loyalist paramilitary UVF and UDA, led to the introduction of internment in 1971, which meant the arrest and detention of those suspected of sectarian conflict. However, no loyalist paramilitaries were arrested under internment, whereas 1600 nationalists were. ...read more.

The Saville enquiry into the events of 30th January 1972 was established after campaigns by the victim's families and much of the sources A, B and C are all linked to this enquiry. Source A is an article from a British newspaper that is usually sympathetic to the military. The suggestion that the army was at fault on 30 January 1972 is firmly rebutted. The Daily Mail is known as a conservative newspaper supporting the military, which one would expect to defend their cause Source B is an account of the b****y Sunday enquiry, suggesting that the army were to blame for the events that occurred, written in The Guardian newspaper. The author describes recent scientific evidence that those killed were posing no threat, as claimed by the Army. Source C is a transcript of a witness witness recalling how he overheard soldiers talk of "clearing the Bog". The account is only taken from one person. The source may be unreliable for giving a sound historical interpretation of b****y Sunday, though the statement is vivid and credible. ...read more.

Source 12g is from the Londonderry coroner. The coroner says the army "ran amok that day"..."Shooting innocent people". He blames the army for the firing and murder of 13 Catholic men and injury of a further 13. His source is historically close to the events, close to the community, and of a Protestant and military background. This source is particularly revealing. Source 12h is an extract from a book written 15 years after the firings by Patrick Bishop and Eamonn Mallie that seeks to explain the behaviour of the IRA. The source is says there is no way that the rioters could have shot first. The views expressed are divided, as many of the authors either come from a background which would defend the army or from a nationalist background, usually meaning that the source would defend the protestors. Aside from the polarity of background and purpose, the time of writing should be taken into account when examining these sources. Those that appear to have no clear sources of bias may be more useful to the historian in evaluating the event in question. ...read more.