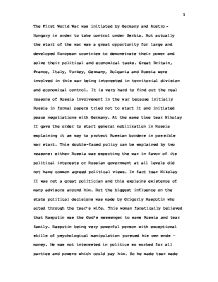 The First World War was initiated by Germany and Austro-Hungary in order to take control under Serbia. But actually the start of the war was a great opportunity for large and developed European countries to demonstrate their power and solve their political and economical tasks. Great Britain, France, Italy, Turkey, Germany, Bulgaria and Russia were involved in this war being interested in territorial division and economical control. It is very hard to find out the real reasons of Russia involvement in the war because initially Russia in formal papers tried not to start it and initiated peace negotiations with Germany. At the same time tsar Nikolay II gave the order to start general mobilization in Russia explaining it as way to protect Russian borders in possible war start. This double-faced policy can be explained by two reasons: either Russia was expecting the war in favor of its political interests or Russian government at all levels did not have common agreed political views. In fact tsar Nikolay II was not a great politician and this explains existence of many advisors around him. But the biggest influence on the state political decisions was made by Grigoriy Rasputin who acted through the tsar's wife. This woman fanatically believed that Rasputin was the God's messenger to save Russia and tsar family. Rasputin being very powerful person with exceptional skills of psychological manipulation pursued his own ends - money. He was not interested in politics so worked for all parties and powers which could pay him. ...read more.

The progressive block directed its actions to the purpose of renewing present government which was disable to finish the war quickly and in favor of Russia as it declared in the beginning. The quick war finish plan was primarily based on economical reforms required to be provided in agriculture, industry and local authorities reconstructions with submission of present officials. Actually the plan was not based on revolutionary actions. The majority of progressive block comprised representatives of liberal parties and fractions. In spite of presence of various parties pursued their own different interests there were the initial interest 4 V.I.Lenin. "Complete Works".vol.20(p.127-128) which coincided with and united so variable parts of Russian society. This common interest was to weaken the present power and made tsar give the throne to his son as the alternative to make necessary changes in Russian internal and external policy. So the progressive block started to create opposition to press the power to precipitate war actions and victory and also to involve bourgeois block in economic and political processes as much as possible. The monarchists reacted to the opposition by creating "black block" requiring to dissolve the State Duma as the basis of opposition. So the problematic war situation initiated establishment of "progressive block" and further opposition creation which led to the State Duma dissolve and establishment of Temporary Government. "Tsar himself has stood up to protect his country"5. Again, tsar's own appointment to the position of Supreme Commander-in-Chief was initiated by Gregory Rasputin who could understand well that his power would immediately finish if "progressive block" based on bourgeoisie took control. ...read more.

So the ground for the February Revolution was perfectly prepared by crisis in all aspects - economical, political and national - raised during Russian participation in the war. It was easy to start coup d'etat with the extreme strained situation and the first event happened in Petrograd - absence of bread because of lack of transport (all transport was used for war actions). The monarchy after its demonstration of disability to conduct the war properly had to be overthrown by new power supporting its strength by promises to take proper control under the Russian participation in the war and bring the victory. The new power dethroned tsar government and renewed power at all levels. The tasks of Bourgeoisie were to develop capitalism methods in agriculture and industry, to introduce constitutional basis for ruling, to solve the problems of national oppression of Ukrainians, Armenians and other nations within the territory of Russia. The democratic principles of new power gave the working class and Bolshevists possibilities to act openly and establish the Council of Working Deputes which started preparing next, the third Revolution.7 If the Russian tsar and his confidants could clearly posed Russia's position in the First World War it would be hard to initiate and ground the February Revolution. 7 V.V. Sazonov. "Was it needed to go from February to October". Dialogue. Moscow.1991. vol.2(p.17-20) The First World War was one of the major reasons of February Revolution and further events in Russia which encouraged Bolshevists to start October Revolution and come to power. And that totally changed the history of Russia and turned over the new page of the world history. 1 ...read more.