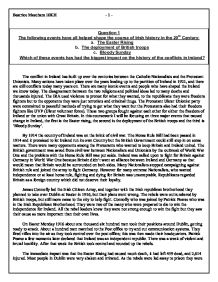 The following events have all helped shape the course of Irish history in the 20th Century: a. The Easter Rising b.The deployment of British troops c.b****y Sunday Which of these events has had the biggest impact on the history of the conflicts in Ireland

The conflict in Ireland has built up over the centuries between the Catholic Nationalists and the Protestant Unionists. Many actions have taken place over the years leading up to the partition of Ireland in 1921, and there are still conflicts today many years on. There are many iconic events and people who have shaped the Ireland we know today. The disagreement between the two religions and political ideas led to many deaths and thousands injured. The IRA used violence to protest for what they wanted, to the republicans they were freedom fighters but to the opponents they were just terrorists and criminal thugs. The Protestant Ulster Unionist party were committed to peaceful methods of trying to get what they want but the Protestants also had their freedom fighters like UVF (Ulster volunteer force). These two groups fought against each other for either the freedom of Ireland or the union with Great Britain. In this coursework I will be focusing on three major events that caused change in Ireland, the first is the Easter rising, the second is the deployment of the British troops and the third is 'b****y Sunday'. By 1914 the country of Ireland was on the brink of civil war. The Home Rule Bill had been passed in 1914 and it promised to let Ireland run its own Country but the British Government could still step in on some matters. There were many opponents among the Protestants who wanted to keep Britain and Ireland united. The British government was saved from civil war between Nationalists and Unionists by the outbreak of World War One and the problem with the Home Rule Bill was put aside. Ireland was called upon to fight for Britain against Germany in World War One because Britain didn't want an alliance between Ireland and Germany as that would mean that Britain would be surrounded on both sides. ...read more.

On the 5th of October supporters for the Civil Rights Movement organised a march but it was then banned by the government. The marchers decided to ignore the ban; police attacked the marchers injuring 77 of them. This then meant that the supporters felt more action was needed to put a stop to all the prejudice. In January 1969 the people's democracy (students from Queens University Belfast) led a march from Belfast to London, when they reached the Burntollet Bridge they were ambushed, stoned, and beaten by a mob of Protestants. Catholics cheered when the marchers reached Londonderry, the police were sent around to raid houses and abuse the residents. By April 1969 marches had got worse; this made the Prime Minister Terrence O'Neill resign from his post. With Northern Ireland on the very verge of civil war, the British finally decided to take action. The British government decided it could not trust the RUC (Royal Ulster Constabulary) to deal with the problem. On the 14th August 1969 the British government sent the army troops onto the streets of Belfast and Derry to try and end the growing troubles there. The British had finally lost control of the situations in Northern Ireland and the only way they believed they could solve it was to use violence against the marchers The deployment of British troops into Northern Ireland had an immediate impact in Ireland. The Catholics in Northern Ireland first believed that the troops were a blessing and that they would help them fight the discrimination against them. Catholics welcomed the British troops in their country at first as they thought they wouldn't be biased like the RUC were, they offered them tea and biscuits in the streets. The Protestants were suspicious of the troops they didn't know which side the troops would fight on. They were concerned that they would take the Catholics side and cause the Protestants to loose control over Northern Ireland. ...read more.

Much of the violence has died down now but people still believe that Ireland should be a full free republic instead of two separated countries. It was a big turning point in Irish history. The event had so many consequences and 'b****y Sunday' was at the core of these changes in Northern Ireland. Everything that happened politically in Ireland from then on could be traced back to this important event. Each of the events I have talked about had an impact on the Ireland we know today, The Easter Rising led to partition. The Deployment of troops led to 'b****y Sunday' and the death of the 13 members of the public shocked the nation. Finally 'b****y Sunday' led to direct rule being reinstated and that led to how Ireland is today and because of media and television it was the one that more people heard about. I believe the Easter Rising had the most impact on the history of Ireland. Without the Easter Rising none of the other events would have taken place and partition also would not have happened because the Easter Rising is what led the British Government to decide to issue Partition. Partition is what led to the deployment of troops which led to 'b****y Sunday' as Partition led to the Catholics getting in an uproar as they were in a minority which led to the deployment of troops. Without the deployment of troops then they could not have shot the seven who died on 'b****y Sunday'. Each action that was made in Ireland had repercussions that led to another event taking place. The Easter Rising caused a lot of upset in Northern Ireland and along with other things this is why the British Government stepped in and ordered partition. We know Ireland today as two separated countries Northern Ireland as part of the United Kingdom and the Republic of Ireland as its own country. This would not be like this without the Easter Rising and the deaths of the rebel leaders. ?? ?? ?? ?? - 1 - Beatrice Meecham 10KH ...read more.