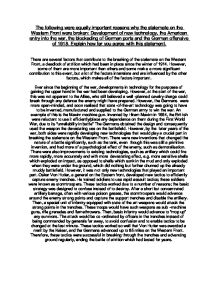 The following were equally important reasons why the stalemate on the Western Front were broken: Development of new technology, the American entry into the war, the blockading of German ports and the German offensive of 1918. Explain how far you agree wit

The following were equally important reasons why the stalemate on the Western Front were broken: Development of new technology, the American entry into the war, the blockading of German ports and the German offensive of 1918. Explain how far you agree with this statement. There are several factors that contribute to the breaking of the stalemate on the Western Front, a deadlock of attrition which had been in place since the winter of 1914. However, some of them are more important than others and some make a more significant contribution to this event, but a lot of the factors interrelate and are influenced by the other factors, which makes all of the factors important. Ever since the beginning of the war, developments in technology for the purposes of gaining the upper hand in the war had been developing. However, at the start of the war, this was not apparent to the Allies, who still believed a well-planned cavalry charge could break through any defence the enemy might have prepared. However, the Germans were more open-minded, and soon realised that state-of-the-art technology was going to have to be invented, manufactured and supplied to the German army to win the war. ...read more.

The British and the French insisted that the Americans had to shoulder a greater burden of the war, but Pershing thought differently. Horrified by Allied leadership, he did not want to entrust his soldiers to the Allied generals, and wanted American autonomy; he insisted that the American forces act independently, which greatly irritated the Allied generals. However, by the end of the war, there had been over 300'000 American casualties. Since the beginning of the war, Britain had set up a naval blockade to prevent Germany from shipping in its vital supplies, which was part of the strategy of attrition. The only access to the sea that Germany has for shipping purposes was the North Sea, and Britain was eager to make sure Germany could not import the vital supplies that she needed not only for the military needs of the country, but also for the everyday supplies which were being drained by the war effort, e.g. food. A minefield was placed all along the North Sea between Britain and Norway, to prevent Germany from sending any ships through it. 75 U-boats were sunk due to the placement of mines. ...read more.

The blockade led to the Germans beginning a policy of unrestricted submarine warfare in the Atlantic Ocean, which then led to the sinking of the Lusitania, which was a major contributing factor to the American entry into the war. However, the main reason that the stalemate broke was due to the Spring Offensive of 1918; the other factors were the reasons this offensive took place. The American entry into the war created pressure on the German generals, as did the shipping blockade, but the improvements in technology made the idea of a grand offensive seem better. It is also important to remember that another major factor contributing to the Spring Offensive, and therefore the breaking of a stalemate, was the Russian Revolution of 1917, which led to the Russian surrender and the freeing-up of 62 divisions. Without these divisions, Germany would never have had the experienced manpower to operate all the new technology it had developed and so the Spring Offensive could never have happened. In conclusion, the actual main (and therefore the most important) factor contributing to the breaking of stalemate on the western front was the German offensive of 1918; however, this could not have happened without the other factors taking place as well, which makes them all very important factors also. ...read more.