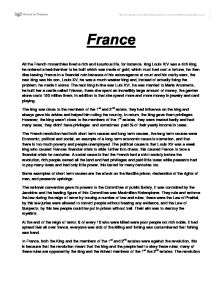 The French revolution had both short term causes and long term causes, the long term causes were Economic, political and social, an example of a long term economic cause is starvation, and that there is too much poverty and people unemployed.

France All the French monarchies lived a rich and luxurious life, for instance, king Louis XIV was a rich king, he ordered a bedchamber to be built which was made of gold, which must had cost a fortune, he then dies leaving France in a financial ruin because of his extravagance at court and his costly wars, the next king was his son, Louis XV, he was a much weaker king and, instead of actually fixing the problem, he made it worse. The next king in line was Luis XVI, he was married to Marie Antoinette, he built her a castle called Trianon, there she spent an incredibly large amount of money, the garden alone costs 150 million livers, in addition to that she spend more and more money in jewelry and card playing. The king was close to the members of the 1st and 2nd estate, they had influence on the king and always gave his advise and helped him ruling the country, in return, the king gave them privileges. ...read more.

The 1st estate was made up of people of the church, they were very important in the time were people believe in heaven and hell, so, in return for pray for the king and people, they had privileges like that they didn't have to pay the taille (the main tax). The 2nd estates were made up of nobles who helped the king for centuries, in battle at court and in government jobs, they are expected to serve the king in war, in return, they had privileges. The 3rd estate are the most hard working estate, they are all the other people other than the nobles and the clergy, they are treated unfairly and badly and had no privileges. When the economic crises occurred, these was less money and the process of food rises, and it was for fair for the 3rd estate as they don't have enough money. Because of this, there was famine and members of the 3rd estates had to fight for their rights before they die from starvation, so there were violent moves by these people and the French revolution begun. ...read more.