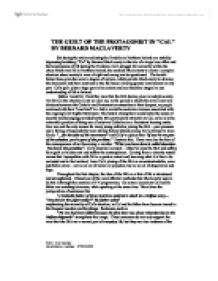 The Guilt of the Protagnoist in 'Cal' by Bernard Maclaverty

THE GUILT OF THE PROTAGONIST IN "CAL" BY BERNARD MACLAVERTY Set during the sixties and using the Troubles in Northern Ireland as a suitably depressing backdrop, "Cal" by Bernard MacLaverty is the tale of a tragic love affair and the hopelessness of life during the Troubles. Cal's struggle for normality within the chaos which was life in Northern Ireland, has enabled MacLaverty to create a complex situation where society's view of right and wrong can be questioned. The book's factual base gives the novel a degree of realism, which permits MacLaverty to develop the characters and their emotions to the full hence allowing greater involvement on my part. Cal's guilt plays a huge part in his actions and are therefore integral to my understanding of life in Ireland. Before I read Cal, I held the view that the IRA had no place in today's society. Yet for Cal the situation is not so clear cut, as the period in which the novel is set saw divisions between the Catholic and Protestant communities at their deepest, as people remained with their "own kind" in a bid to avoid the sectarian violence associated with the ongoing Civil Rights Movement. This hostile atmosphere would make the sense of security and belonging provided by the IRA particularly attractive to Cal, as he is in the vulnerable position of being one of only two Catholics on a Protestant housing estate. ...read more.

Yet not until the third chapter does MacLaverty decide to reveal what "it" exactly is, by dramatically recreating Robert's murder in one long flashback. By delaying the revelation that Cal is an accessory to murder, MacLaverty is able to arouse greater sympathy towards Cal than if the murder been described first. Had this been the case, then the reader would have a pre-conceived idea of Cal's nature and disposition, a situation that never arises due to Maclaverty's technique of displaying Cal's guilt then revealing the cause. As with the other flashbacks, the murder allowed me to see the extent of Cal's remorse and consequently dispelled my belief that all IRA members are cold, calculated killers. I had also previously believed that extreme religious groups were contradictory in their very nature - their extreme violence is forbidden by the religion they are fighting for. Yet, as I witnessed Cal's religious turmoil over Robert's murder, this perspective changed also. Even as a lapsed Catholic Cal applies the Catholic belief that penance achieves absolution to himself with particular zeal. His attitude can be summed up by his reaction to Robert's murder leaving him, like the biblical Caine, with: " A brand stamped in the middle of his forehead which would take him the rest of his life to purge."1 His relationship with Marcella Morton is the area of his life where he applies this belief with singular determination. ...read more.

In previous situations this paradox would have been used to convey the idea of Cal's attitude towards his guilt and his desire for penance but this is not the image portrayed here, as an almost frivolous tone is used. The effect was the creation of a more realistic character, and an inventive use of the medium of guilt. MacLaverty's description of Cal and his guilt allowed me to see the Troubles in their true context for the first time - "Cal" showed me that the people affected by the Troubles are human too, not merely statistics, and it revealed the futility of their lives. MacLaverty's factual narrative means that judgement is left up to the reader and my own judgement on Cal surprised me at first - how could I sympathise with an IRA member? Yet this is only confirmation of MacLaverty's skill as a writer, as "Cal" has changed my views on the IRA. As a study in guilt "Cal" shows the extent to which guilt can effect a person and, what I found most interesting, its effect on other people. The guilt and degree of realism of the protagonist Cal, paints a poignant picture of life in Ulster - during the 60's at least - and it is the reality of this picture which is the most saddening aspect of the novel, a picture which I am indebted to MacLaverty for making me see. 1738 Words ?? ?? Ruth Diansangu Candidate number 970434399 ...read more.