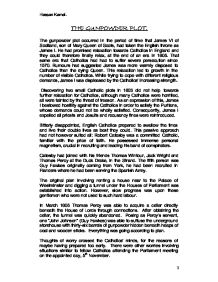 THE GUNPOWDER PLOT. The gunpowder plot occurred in the period of time that James VI of Scotland, son of Mary Queen of Scots, had taken the English throne as James I. He had promised relaxation towards Catholics in England and they could therefore finally relax, at the end of an era in 1605. That same era that Catholics had had to suffer severe persecution since 1570. Rumours had suggested James was more warmly disposed to Catholics than the dying Queen. This relaxation led to growth in the number of visible Catholics. While trying to cope with different religious demands, James I was displeased by the Catholics' increasing strength. Discovering two small Catholic plots in 1603 did not help towards further relaxation for Catholics, although many Catholics were horrified, all were tainted by the threat of treason. As an expression of this, James I bestowed hostility against the Catholics in order to satisfy the Puritans, whose demands could not be wholly satisfied. Consequently, James I expelled all priests and Jesuits and recusancy fines were reintroduced. ...read more.

There was evidence of strong warning in the letter: "My Lord, out of the love I bear for some of your friends, I have a care for your preservation", and in other parts also, such as, "...devise some excuse to shift your attendance of this Parliament", and "retire yourself into your country, where you may expect in the event of safety. There was more, now directing as to what Lord Monteagle should be safe from: "...they shall receive a terrible blow, the Parliament, and yet they shall not see who hurts them..." The letter closed with "I hope God will give you the grace to make good use of it [the letter], to whose holy protection I commend you", and at that, it was blatant that the situation was religious. The authorship of the letter was not identified although Francis Tresham was Lord Monteagle's brother-in-law, which meant that he cared for any Catholic that was going to be a victim of the 'blow'. ...read more.

There couldn't have been any way that the conspirators got a hold of thirty-six barrels without drawing attention to them. It is a possibility that the government gave a hand to help in all of this, as far as I believe that is so. The soldier who killed Catesby and Percy at Holbeech House in the Midlands was given a large pension of ten pence a day for life. But why: when their arrest and torture was much more desirable so that the names of any other conspirators might be found out? My theory is that this was all a part of the plans of Robert Cecil; that all of the Catholics would die, not having a bother about torturing the other conspirators' names out of them, as he already knew them. There are, however, counter-arguments to many of the above points. There are some historians who have pointed out some issues in favour of the theory that the plotters were pawns in the hands of Robert Cecil and that he orchestrated the whole affair in his bid to get James to ban Catholics altogether. Hassan Kamal 8M Hassan Kamal. 1 ...read more.