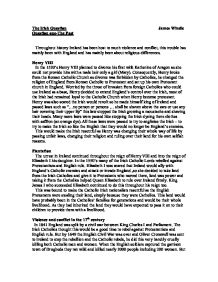 The Irish Question James Windle Question one-The Past Throughout history Ireland has been host to much violence and conflict, this trouble has mainly been with England and has mainly been about religious differences. Henry VIII In the 1530's Henry VIII planned to divorce his first wife Katherine of Aragon as she could not provide him with a male heir only a girl (Mary). Consequently, Henry broke from the Roman Catholic Church as divorce was forbidden by Catholics, he changed the religion of England from Roman Catholic to Protestant and set up his own Protestant church in England. Worried by the threat of invasion from foreign Catholics who could use Ireland as a base, Henry decided to extend England's control over the Irish, most of the Irish had remained loyal to the Catholic Church when Henry become protestant. Henry was also scared the Irish would revolt so he made himself king of Ireland and passed laws such as "...no person or persons ... shall be shaven above the ears or use any hair covering their upper lip" this law stopped the Irish growing a moustache and shaving their heads. Many more laws were passed like stopping the Irish dyeing there clothes with saffron (an orange dye).All these laws were passed to try to anglicise ...read more.

Thousands died of disease and starvation. James and his army continued to attack more Protestant towns causing anger in Britain. By marriage to Mary the Queen of England, the Dutch William of Orange became the new king of England. William was James's son-in-law but unlike James, William was protestant and in 1690 William took his armies to Ireland to fight James and his Catholic allies. William won great victories at the battle of the Boyne and at Aughrim, It was not long before James II and the catholic armies surrendered. William of Orange's victories over the Catholics are still celebrated today by the Irish Protestants of Ulster. They parade through the streets wearing orange. These marches cause a lot of friction in Ireland as they pass through Catholic areas and celebrate the Protestants' victory over the Catholics. This caused a lot of resentment in Ireland because the Catholics suffered terrible beatings at the hands of the Protestants and William of Orange. The 'Orange marches' still cause anger and resentment today as the Protestants are celebrating their brutal victory over the Catholics these marches also pass through Catholic areas causing even more friction. The Potato Famine In 1846 Ireland's entire potato crop totally failed. ...read more.

Britain's actions caused resentment because they killed all the nationalist leaders making them martyrs and brutally crushed the republican rebellion. Although many Irish people disagreed with the actions taken by the rebels they were shocked that the British had sentenced them to death. The use of massive and brutal force against the rebels caused the Irish Nationalists to feel even more anger and resentment towards the British. The above incidents show that the Irish Nationalists' anger and resentment towards Britain is deep rooted and has been growing for generations. The British interference in Ireland dated back to Henry VIII and had grown in ruthlessness over the generations. Resentment and Anger towards Britain would grow in the Irish Nationalists from their early childhood, as their parents would tell stories of how the British killed their relatives and took away their land and livelihoods. The British could have tried to win over the Irish people by helping them as close neighbours when they were starving through the Potato Famine, but the help was too little and too late and so caused more anger and resentment. Although peace efforts have been made, the anger and resentment is so deep rooted that no clear ending to the conflict can be seen. Neither side can forget the past. ...read more.