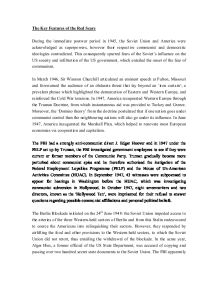 The key features of the Red Scare

The Key Features of the Red Scare During the immediate postwar period in 1945, the Soviet Union and America were acknowledged as superpowers, however their respective communist and democratic ideologies contradicted. This consequently spurred fears of the Soviet's influence on the US soceity and infiltration of the US government, which entailed the onset of the fear of communism. In March 1946, Sir Winston Churchill articulated an eminent speech at Fulton, Missouri and forewarned the audience of an obdurate threat that lay beyond an 'iron curtain'; a prevalent phrase which highlighted the demarcation of Eastern and Western Europe, and reinforced the Cold War tensions. In 1947, America recuperated Western Europe through the Truman Doctrine, from which instantaneous aid was provided to Turkey and Greece. ...read more.

In September 1947, 43 witnesses were subpoenaed to appear for hearings in Washington before the HUAC, which was investigating communist subversion in Hollywood. In October 1947, eight screenwriters and two directors, known as the 'Hollywood Ten', were imprisoned for their refusal to answer questions regarding possible communist affiliations and personal political beliefs. The Berlin Blockade initiated on the 24th June 1948: the Soviet Union impeded access to the arteries of the three Western-held sectors of Berlin and from this Stalin endeavoured to coerce the Americans into relinquishing their sectors. However, they responded by airlifting the food and other provisions to the Western-held sectors, to which the Soviet Union did not retort, thus entailing the withdrawal of the blockade. ...read more.

headed by Mao Zedong, while the Soviets detonated their first atomic bomb - until then, U.S were the lone country which possessed the detrimental weapon. In 1950 Julius and Ethel Rosenberg, who were Eastern European immigrants, were arrested on charges of espionage, after being convicted of selling nuclear weapons secrets to the Soviet Union during the Second World War. The onset of the trial attracted a lot of media attention and generated a largely polarised response. In June 1950, communist North Korea invaded pro-American South Korea and caused the Korean war to subsequently ensue. It was also a proxy war with the capitalist United States and United Nations allies up against the communist Soviet Union and China, which consequently brought about an upsurge in communist qualms. ...read more.