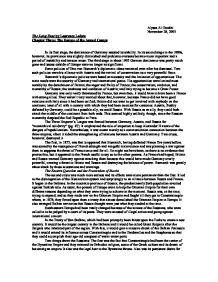 The Long Fuse by Laurence Lafore - Chapter Three: The Europe of the Armed Camps.

Alyssa Al-Dookhi November 28, 2003 The Long Fuse by Laurence Lafore Chapter Three: The Europe of the Armed Camps In its first stage, the dominance of Germany assured its stability. In its second stage in the 1880s, however, its prevalence was slightly diminished and problems overseas became more important and a period of instability and tension arose. The third stage in about 1905 German dominance was pretty much gone and issues outside of Europe were no longer as significant. Some policies of Otto von Bismarck's diplomatic ideas remained even after his dismissal. Two such policies were his alliance with Austria and the revival of conservatism as a very powerful force. Bismarck's diplomatic policies were based on necessity and the limitation of opportunities. The main needs were the security of Germany and international peace. His opportunities were limited most notably by the detachment of Britain; the anger and frailty of France; the conservatism, ambition, and monarchy of Russia; the weakness and confusion of Austria; and Italy trying to become a Great Power. Germany was only really threatened by France, but even then, it would have to have been a France with strong allies. They weren't very worried about that, however, because France did not have good relations with Italy since it had been unified; Britain did not want to get involved with anybody on the continent, least of all with a country with which they had been enemies for centuries. Austria, freshly defeated by Germany, could be a possible ally, as could Russia. With Russia as an ally, they could both attack the middle of the continent from both ends. This seemed highly unlikely, though, since the Russian monarchy despised the Red Republic at Paris. The Three Emperor's League was formed between Germany, Austria, and Russia for "monarchical solidarity" (pg. 87). It emphasized the role of emperors to keep Alexander II aware of the dangers of republicanism. ...read more.

Therefore, when in 1890, a new German Emperor came to the throne in Germany, Wilhelm II the treaty was allowed to lapse and Bismarck was forced to resign. Now France and Russia were two isolated Great Powers facing the block of the Triple Alliance. This new balance of power encouraged an alliance between France and Russia. This made Bismarck's plan fall to ruin. France Finds an Ally The Franco-Russian alliance was signed in 1894 for mutual military support if attacked by Germany. France made large loans to Russia for industrial development. This was the new balance of power in Europe. Distractions Overseas There were no wars in Europe over territories outside of Europe although attention was distracted by various nations, expansion, and annexation of territory in Africa and Asia. During this period, there was also the Boer War and the Spanish-American War. The importance of this period of imperialism is in the rise of nationalism. Building empires added to the prestige and power of individual nations. It was a time of patriotic visions, great fortunes, and conquest. A new understanding of national unity lead to desires for national honor. Austria-Hungary was not included among this imperialistic urge; it had no desire to acquire colonies. One result of this age of expansion was the end of British aloofness and isolation. For Italy, its designs on Ethiopia and its embarrassing failure there indirectly led to Italy's realignment with France and its gradual separation from The Dual Monarchy and Germany. One further instance was the Russo-Japanese War of 1905. These little incidents distracted from possible conflicts on mainland Europe. Chapter Four; The "Encirclement" of Germany Germany's main goal was to isolate France, but with the Franco-Russian Alliance, this objective was defeated. Instead, Germany became isolated. German leaders thought this was scandalous and that it was all the fault of the Russians, when, in fact, if Germany had allied with Russia, a Franco-Austrian Alliance would have been formed and pretty much the same thing would have happened. ...read more.

The Germans were helpless against he French and the British who were joined by Italy. Austria supported Germany but this embarrassment remained in German memory. Bulow's crisis was started to break up the encirclement of Germany but in the end it was ineffective and was even more tightly surrounded. This led to German leaders feeling conspired against and generally scared. This was important because it was a sign of the breakdown of Anglo-German relations. The Naval Question The Germans began building a navy of a fleet of nineteen battleships the purpose was not to erqual the British Navy but to threaten any world navy. Britain saw this as a threat. In Germany, the people believed that the British were planning a surprise attack. Great Britain knew that it needed security on the seas for the trade it needed to feed its nation. This issue of the German navy was affecting the balance of power. The British freedom of commerce had been established by British friendship with neighboring nations and protecting their independence from threat. The Triple Entente Britain had not outright declared an alliance with France but the French worked brilliantly in diplomatic endeavors to build an Anglo-Russian entente. The British were beginning to abandon their isolationism. Because of the Russo-Japanese war and Russia's defeat Russia was suddenly no longer a power to reckon with among the Great Powers. Germany and Austria felt safe along their eastern frontiers and the British were strongly anti-Russian because of a Russian attack on their ships in connection with the Russo-Japanese war. The situation reversed quickly and the Russians needed Britain, and to England, Germany was the greater danger. In 1907, an Anglo-Russian agreement was signed. In this, Persia was divided into spheres of influence Russia ceded Afghanistan to British influence and the phrase "Triple Entente" began to be seen in the press. Feeling threatened, Germany defended Austria-Hungary as a Great Power. They believed that if Austria-Hungary went, then Germany was lost. Germany was encircled and detailed military plans began to be written. ...read more.