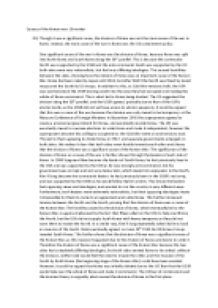 The main cause of the war in Korea was the US containment policy. Discuss.

Ã¯Â»Â¿Causes of the Korean war 16 marker 4. Though it was a significant cause, the division of Korea was not the main cause of the war in Korea. Instead, the main cause of the war in Korea was the US containment policy. One significant cause of the war in Korea was the division of Korea, because Korea was split into North Korea and South Korea along the 38th parallel. This is because the communist North was supported by the USSR and the anti-communist South was supported by the US: both sides were very nationalistic, but had very differing ideologies. This caused hostilities between the sides, showing how the division of Korea was an important cause of the Korean War. Korea had been ruled by Japan until 1945, but after WW2 the North was freed by Soviet troops and the South by US troops. In addition to this, as Cold War tensions built, the USA was worried about the USSR moving south into the area they had occupied and making the whole of Korea communist. This is what led to Korea being divided. The US suggested the division along the 38th parallel, and the USSR agreed, probably due to fear of the USAâ€™s atomic b**b, as the USSR did not yet have access to atomic weaponry. ...read more.

This hostility is further emphasised by the fact that Stalin set up Cominform in 1947, in response to the Truman Doctrine, to help the spread of communism and protect communist states from US aggression. The US saw Cominform as a major threat, as it strengthened the USSRâ€™s control and highlighted the fact that the USSR wanted to spread communism and were going to great lengths to do so. Because of this, it is obvious that the US containment policy was an important cause of the Korean War, as it heightened tensions between the superpowers. Furthermore, in 1947 Truman described communism as a system of terror, and sent spies to the USSR, discovering that it was planning of spreading communism further (for example, the USSR planned to take over Burma and the Philippines). This strengthened fear of communism and led to a wide-spread fear of the domino theory, and was arguably the main factor that led to the US involving itself in the war. This shows that the US containment policy was an important cause of the war in Korea as it is suggested that the US only got involved in the war due to their determination to contain communism and stop its spread: without US support South Korea could not have opposed the North, so the war may never have begun. ...read more.

The US containment Policy meant the US were fearful of the domino theory and very determined to stop the spread of communism: this is the reason they initially suggested the division of Korea, as they were concerned about the USSR making the whole of Korea communist, and therefore spreading communism further. The containment policy was not only a cause of the war in itself, but also the reason for the division of Korea. The containment policy also meant the US had a bad relationship with China, as the Truman Doctrine (created due to the USâ€™ fear of communism spreading) had failed to save China from communism, making the US hostile towards China. This meant the USSR boycotted the USSR in protest, so could not veto the US appeal to send troops to support South Korea, so the relationship between the US and China was also a cause of the war. However, the most significant cause of the war in Korea was the Us policy of containment, as this is what led to the Truman Doctrine, and hence the poor US relations with China. The most significant cause of the war was the US containment policy as it meant the US were willing to do whatever it took to stop the spread of communism, and was arguably the reason for the American involvement in the war. ...read more.