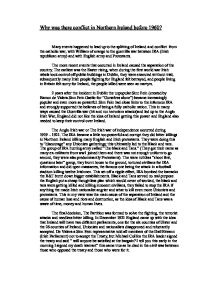 The main reasons for partition within Ireland

Why was there conflict in Northern Ireland before 1960? Many events happened to lead up to the splitting of Ireland and conflict from the catholic war, with William of orange to the guerrilla war between IRA (Irish republican army) and with English army and Protestants. The more recent events that occurred in Ireland caused the separation of the country. The earliest was the Easter rising, when during the first world war Irish rebels took control off public buildings in Dublin, they were executed without trial, subsequently many Irish people fighting for England felt betrayed, and people living in Britain felt sorry for Ireland, the people killed were seen as martyrs. 2 years after the incident in Dublin the unpopular Sinn Fein (created by Eamon de Valera Sinn Fein Gaelic for "Ourselves alone") ...read more.

The Anglo Irish war or The Irish war of independence occurred during 1919 - 1921. The IRA became a little too powerful and corrupt they did bitter killings in Northern Ireland killing many English and Irish protestants. They were doing this to "discourage" any Unionists gatherings; this ultimately led to the Black and tans. The group of IRA hunting army called "The black and Tans." (They got their name as many ex-militants from ww1 joined them and there was not enough uniform to go around, they were also predominantly Protestants). The were ruthless "shoot first, questions later" group, they burnt house to the ground, tortured civilians for IRA information and did open massacres, the famous one being the attack in a football stadium killing twelve Irishmen. ...read more.

The final decision, The Partition was formed to solve the fighting, the terrorist attacks and needless bitter killing. In December 1921 England came up with the idea that Ireland will have two different parliaments, one for the six counties of Ulster and the 26 counties of Ireland. Unionists and nationalists disapproved and reluctantly accepted. De Valera a Sinn Fein representative told all members of the Dail Eireann (Irish Parliament) not to accept the Treaty, but Michael Collins the IRA leader signed the treaty and said " will anyone be satisfied at the bargain? I tell you this early in the morning I signed my death warrant" this came true as he died in the civil was between those who opposed the treaty and those who were for it. ...read more.