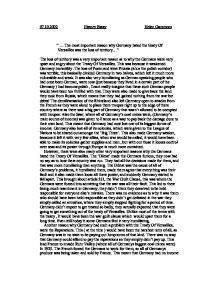 &quot; ... The most important reason why Germany hated the treaty Of Versailles was the loss of territory...&quot; discuss

07.10.2002 History Essay Helen Gammons " ... The most important reason why Germany hated the treaty Of Versailles was the loss of territory..." The loss of territory was a very important reason as to why the Germans were very upset and angry about the Treaty Of Versailles. This was because it weakened Germany incredibly .The loss of Posen and west Prussia (a.k.a the polish corridor) was terrible, this basically divided Germany in two halves, which left it much more vulnerable and weak. It was also very humiliating as German speaking people who had once been German, were now (just because they lived in a certain part of the Germany ) had become polish , I cant really imagine that these such German people would have been too thrilled with that. They were also made to give back the land they took from Russia, which means that they had gained nothing from the war but debts! The demilitarisation of the Rhineland also left Germany open to attacks from the French as they were aloud to place there troupes right up to the edge of there country where as there was a big part of Germany that wasn't allowed to be occupied with troupes. ...read more.

There was no evidence as to why it was them who should have been held responsible as they didn't get defeated in the war they simply called an armistice, where they simply stopped fighting for a period of time . Germany didn't expect to get treated so badly, they actually expected that they were going to get something out of the treaty of Versailles. Unlike most of the terms with the treaty , It would have been the war guilt clause which would upset them for a long time. Even still today it some Germans find it very humiliating. Another reason why Germany had such a problem with the Treaty Of Versailles, were the Reparations. This ( at the time ) would have been the harshest term of all, as Germany was in no state to be paying out lump sums of that kind. There was no way that Germany could afford to pay the reparations so they simply didn't pay up. This lead France to invade Ruhr Valley (where all of Germanys biggest coal mines were) ...read more.

This angered the German's as one of the main terms of the treaty of Versailles was that France could have Alsace-Lorraine as it had mostly French speaking people in it, so they should be united. The 'Big three' were also worried that the Germans would try and cause another war so they put very harsh limitations on their army. They were allowed no more than 100,000 men, they were not allowed any air force, no dreadnought battleships and no submarines, they were also not allowed any military or naval aircraft, this meant that if anyone had decided to attack Germany they would have a much stronger chance of being successful now, as they really weren't all that well equipped, but they were just strong enough to hold off a weak attack. In conclusion I believe that it was a combination of 4 main factors, the Diktat which basically meant that all the other things had to happen, the War Guilt Clause which would have caused irreparable damage to their ego, the loss of land that left them weak and vulnerable and the reparations which crippled them economically. It was a combination of these three factors which destroyed Germany. ...read more.