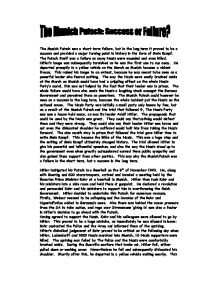 The Munich Putsch: success or failure?

The Munich Putsch was a short term failure, but in the long term it proved to be a success and provided a major turning point in history in the form of Mein Kampf. The Putsch itself was a failure as many Nazis were wounded and even killed. Hitler's image was subsequently tarnished as he was the first one to run away. He departed promptly in a yellow vehicle as the March on Munich became a violent fracas. This ruined his image to an extent, because he was meant to be seen as a powerful leader who feared nothing. The way the Nazis were easily brushed aside at the March on Munich would have had a crippling effect on the whole Nazis Party's moral, this was not helped by the fact that their leader was in prison. The whole failure would have also made the Nazis a laughing stock amongst the German Government and perceived them as powerless. The Munich Putsch could however be seen as a success in the long term, because the whole incident put the Nazis on the national scene. The Nazis Party was initially a small party only known by few, but as a result of the Munich Putsch and the trial that followed it, The Nazis Party was now a house-hold name, as was its leader Adolf Hitler. ...read more.

Shortly after this, he departed in a yellow vehicle waiting nearby. This did nothing but stain his image as he was now viewed as a coward. He, the initiator of the uprising, was the first to run away. The n**i leadership was then arrested and put on trial for treason. General Ludendorff was also amongst those arrested. The consequences of the trial were probably more significant than the uprising itself. At the trial, Hitler was able to make powerful speeches. Examples of this are, "You may pronounce us guilty a thousand times, but the Goddess who presides over the Eternal Court of History will acquit us", and "It will be necessary to persuade a new policy. Instead of army conspiracy, we shall have to hold our noses and enter the Reichstag. If outvoting takes longer than outshooting them, at least the results are guaranteed by their own constitution." These speeches made by Hitler at the trial were major pieces of propaganda as they appealed to the hearts and minds of German people. The Nazis won a lot of support through speeches made by Hitler. This transformed Hitler from being a vaguely known politician to a champion of the right wing. His imprisonment, which lasted only 9 months, was significant. In this time Hitler was able to reappraise his methodology and to construct what ultimately became the Bible of the Nazis, Mein Kampf. ...read more.

This caused the Nazis to be disgraced as they were defeated and as a result leading members, of which General Ludendorff was one, were arrested at the March on Munich on the 9th of November 1923. The Long term success of the Munich Putsch is connected to the failure and collapse of Weimar. This is because one of Hitler's reasons behind initiating the Munich Putsch was the collapse of Weimar. The collapse of Weimar and the fa�ade that was the 'Golden Era' led Hitler to believe that a strong leader was needed and that this leader could be him. This also connects to Versailles, because at Versailles Germany lost Ukraine which they had gained via the Treaty of Brest-Litovsk in 1917. Hitler promised in Mein Kampf that if put into power he would occupy Russian land to provide Lebensraum for German people. Overall, the Munich was a failure in the short term; however it was a success in the long term. The disgrace at the March on Munich and death of 16 Nazis supporters contributed to the short term failure. However the trial and the writing of Mein Kampf were major turning points which both contributed in placing Hitler and the Nazis firmly on the map. This meant the Nazis could now go from strength to strength and this was why the Munich Putsch was a success in the long term. ?? ?? ?? ?? ...read more.