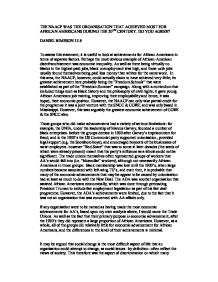 The NAACP was the organisation that achieved most for African Americans during the 20th century. Do you agree?

THE NAACP WAS THE ORGANISATION THAT ACHIEVED MOST FOR AFRICAN AMERICANS DURING THE 20TH CENTURY. DO YOU AGREE? DANIEL BIMPSON 13-8 To assess this statement; it is useful to look at achievements for African Americans in terms of separate factors. Perhaps the most obvious example of African-American disenfranchisement was economic inequality. As well as there being virtually no blacks in the highest paid jobs, black unemployment was high, and those with jobs usually found themselves being paid less money than whites for the same work. In this area, the NAACP, however, could actually claim to have achieved very little; its greatest achievement here probably being the "Freedom Schools" that were established as part of the "Freedom Summer" campaign. Along with a curriculum that included things such as black history and the philosophy of civil rights, it gave young African Americans job training, improving their employability and hence, it was hoped, their economic position. However, the NAACP can only take partial credit for the program as it was a joint venture with the SNCC & CORE, and was only based in Mississippi. However, this was arguably the greatest economic achievement of CORE & the SNCC also. Those groups who did make advancements had a variety of serious limitations: for example, the UNIA, under the leadership of Marcus Garvey, founded a number of black enterprises- before the ...read more.

The journey proved to be successful when RFK stepped in after violent protests to ensure that interstate buses were desegregated. The other main area that social campaigns focused on was lynching; in 1919 alone, more than 70 AA's were lynched. The NAACP ran a long campaign against lynching, publishing "Thirty Years of Lynching" in 1919, as well as takng out large advertisements in newspapers to make people aware of the extent of this crime. Although the NAACP hoped that the election of Franklin D. Roosevelt in 1932 would bring an end to lynching (two African American campaigners against lynching, Mary McLeod Bethune and Walter Francis White had been actively involved in helping Roosevelt to obtain victory & Eleanor Roosevelt had also been a long-time opponent of lynching), Roosevelt feared it would lose him votes and nothing was done. However, FDR's successor, Truman, was persuaded, with pressure from the ADA, to include an anti-lynching bill as part of his fair deal programme, though this was rejected by congress and so never came into effect. The NAACP did most of its work through the courts challenging segregation and racial discrimination in housing, education, employment and transport. It was to become heavily involved in challenging racially discriminating laws before the Supreme Court. ...read more.

The campaign was focused on Mississippi, where voter registration was particularly low (6.7%). Although the Freedom Summer campaign, which was a main part of the campaign for political rights, was a success, and was a joint effort, I would still argue that the NAACP were the most important group for political advancement. This is because as well as their involvement in Freedom Summer, which involved campaigning to Congress, and directly to the President, the NAACP's campaigns had also taken them to the Supreme Court, and they thus had become heavily involved in campaigning to all three strands of US Federal Government, and had met success, mostly to a great degree, at each. However, if there is another group more important for political advancement, it s the ADA, who were able to campaign directly ("from the inside") to the White House, although the ADA was not concerned with Civil Rights only. In summary, I find that my analysis enables me to easily agree with the title statement. The NAACP made significant advancements in both the political and social fields; very much so in the latter. Although its economic achievements were less significant, I would suggest that the groups intention was that economic improvement would follow if social and political equality were achieved, and that these were more important. As historian Brogan agrees: "The NAACP was, and is, the most effective of black pressure groups." ...read more.

The student answers the question set clearly and their line of argument is very evident in the paragraphs. However, I would say there is a lack of expanding on the details in a few areas. Although, overall the judgement is ...

The student answers the question set clearly and their line of argument is very evident in the paragraphs. However, I would say there is a lack of expanding on the details in a few areas. Although, overall the judgement is made using clear and precise details, I feel that the student would gain from adding in extra knowledge that is outside of the textbook. Whilst such a suggestion is not compulsory to adhere to in order to gain full marks, the 'wider knowledge' gives way to further reading which would extend the knowledge of the question set and would help support the line of argument.

The analysis is very evident, although at times lacking. This was only in a few areas but giving more specific details would help make the argument clearer and stronger. The evidence used was well selected and relevant to the line of argument and were developed to a standard level. Whilst a very strong conclusion was made, I feel ending on a quote from a historian is not the best. That quote could have been used in the introduction and used to help base the student's argument rather than wasting it in the conclusion. Such a quote has potential to be developed and stand as a very strong piece of support material for the argument.

I found two spelling mistakes but aside that the grammar and punctuation were fine. I would strongly stress the need for checking over the work as spelling mistakes do not leave a good impression on the examiner. The technical terms used could have been written out in full when first mentioned in the essay before using the abbreviation. Whilst in an exam, this is not compulsory as the student is under time pressure, for coursework, one could argue that it is better to write the name out in full for clarity purposes. The student follows a conventional way of setting out the essay which is logical and sensible.