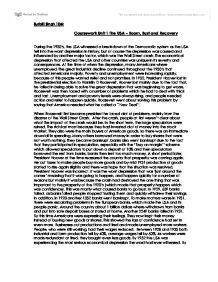 During the 1930's, the USA witnessed a breakdown of the Democratic system as the USA fell into the worst depression in history, but of course the depression was caused and influenced by another major factor, which was the Wall Street crash. The economical depression that affected the USA and other countries was unique in its severity and consequences. At the time of when the depression, many Americans where unemployed. The great industrial decline continued throughout the 1930's that affected Americans majorly. Poverty and unemployment were increasing rapidly, because of this people wanted relief and not promises. In 1932, President Hoover lost in the presidential election to Franklin D Roosevelt. Hoover lost mainly due to the fact that, he failed in being able to solve the great depression that was beginning to get worse. Roosevelt was then faced with a number of problems which he had to deal with thick and fast. Unemployment and poverty levels were always rising, and people needed action and relief to happen quickly. Roosevelt went about solving this problem by saying that America needed what he called a ``New Deal''. When Roosevelt first became president he faced alot of problems, mainly from the disaster of the Wall Street Crash. After the crash, people at first weren't clear about what the impact of the crash would be. In the short term, the large speculators were ruined. The rich lost most because they had invested alot of money into the stock market. They also were the main buyers of American goods, so there was an immediate downfall in spending. Many others borrowed money in order to buy shares that were not worth nothing. They became bankrupt, banks also went bankrupt due to the fact that they participated in speculation, especially with the ''buy on margin'' scheme which allowed speculators to put down a deposit of 10% and then speculators borrowed the rest from banks, banks then lent too much money. ...read more.

The new act made it illegal to sack workers for being in the Union. The Social Security Act provided state pensions for the elderly and for widows. It also allowed governments to provide help for the sick and the disabled. More importantly, the Act setup a scheme for unemployment insurance this meant that employers and workers made a small contribution to a special fund each week. However is workers became unemployed, they would receive a small amount of benefit to help them out until they could find work. The Works Progress Administration brought together all the organisations that created jobs for people. It also extended this work beyond the building projects to create jobs for office workers, unemployed actors, artists and photographers. The Resettlement Administration also helped smallholders and farmers who had not been helped by the Agricultural Adjustment Administration. This organisation moved from 500,000 families to better quality land and housing. The Farm Security Administration replaced the Resettlement Administration in 1937. It also gave special loans to small farmers to help them to buy land to farm on also it built camps to provide decent living conditions and work for migrant workers. The impact of the "New Deal" was huge for the unemployed, for people that were in poverty and also people in agriculture. People began to get back into work. The economy was slowly recovering and parts of America, which were damaged by the depression, were also recovering through the actions Roosevelt took. Although, some groups and organizations rejected claims that the "New Deal" was a good idea. Businesses owners such as the prolific Henry Ford thought that the laws put in place where harming the amount of production done and that government funding were being used insufficiently. They also thought that Roosevelt was taking too much control of the situation in America. Groups like the Supreme Court & the Republicans where highly critical of the "New Deal". ...read more.

He tackled the problem alot better than Hoover did. There were many benefits however as the result of the New Deal. The New Deal restored faith and confidence of the American people in their government. But this was later changed as the result of when he took alot of constructive actions against the Supreme Court and, as a result American people were shocked. Roosevelt then knew he had miscalculated the mood of American People. In addition, there was alot of opposition that Roosevelt had to deal with. In the industry big businesses remained immensely powerful in the USA despite being challenged by the government. However, many big businesses and corporations were against the New Deal. Many blacks benefited. Around 200,000 black Americans gained benefits from the CCC and other New Deal agencies. However, many New Deal agencies discriminated against black people, they either got no work or received worse treatment or lower wages. The New Deal saw women achieve high positions. However many women were attacked for example, Frances Perkins was attacked in the press as a Jew and a Russian spy. The Indian Reorganisation Act in 1934 provided money to help Native Americans to buy and improve their land. However Native Americans remained poor and excluded section of society. So to sum up, I agree to some extent that Roosevelt's New Deal wasn't a complete success, but at least he had tried to tackle the problem and make the USA a better place to live, he in the end started to bring prosperity again into America, many of his New Deal agencies were successful however, he had faced alot of opposition which in turn, the public lost faith and confidence in their President. Although the actions taken by Roosevelt and the Democrats helped America gain some respectability after the dramatic collapse of the economy (Wall Street Crash). So, finally, although the "New Deal" started off as a real success, it steadily declined. ?? ?? ?? ?? Surbjit Singh 10sk Coursework Unit 1 The USA - Boom, Bust and Recovery ...read more.