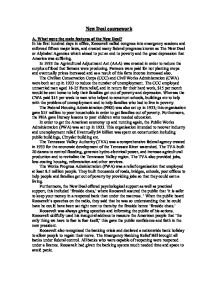 New Deal coursework A. What were the main features of the New Deal? In his first hundred days in office, Roosevelt called congress into emergency sessions and enforced fifteen major laws, and created many federal programs known as The New Deal or Alphabet Agencies which aimed to put an end to poverty and the great depression that America was suffering. In 1933 the Agricultural Adjustment Act (AAA) was created in order to reduce the surplus of food that farmers were producing. Farmers were paid for not planting crops and eventually prices increased and as a result of this farm income increased also. The Civilian Conservation Corps (CCC) and Civil Works Administration (CWA) were both set up in 1933 to reduce the number of unemployment. The CCC employed unmarried men aged 18-25 from relief, and in return for their hard work, $15 per month would be sent home to help their families get out of poverty and depression. Whereas the CWA paid $15 per week to men who helped to construct schools, buildings etc to help with the problem of unemployment and to help families who had to live in poverty. The Federal Housing Administration (FHS) was also set up in 1933; this organisation gave $15 million to poor households in order to get families out of poverty. Furthermore, the FHA gave literacy lessons to poor children who needed education. ...read more.

The aims of the three R's meant that Roosevelt had to put an end to poverty which included an end to unemployment, money for the poor, and end to the banking crisis and the construction of bigger/ better buildings so that new businesses could start up to make more money. B. Why did Roosevelt introduce the New Deal? The New Deal introduced in 1932 was designed to put an end to poverty, depression, unemployment, homelessness and lack of confidence that most Americans suffered following the Wall Street Crash of 1929. One of the most important reasons why Roosevelt introduced the New Deal was to end poverty, which most Americans fell into following the Wall Street Crash and the Great Depression of 1929. 'Hoover hotels' or shanty towns known as 'Homervilles,' were set up as a result of poverty, because many people had lost their homes. People were starving because farmers produced too much food which wasn't being bought, because no one could afford it, therefore farmers simply stopped producing goods. Around 13 million people became unemployed during the Wall Street Crash. That is a quarter of the workforce. This unemployment led to greater poverty. Furthermore, many people had fought in the war for their country, however when they arrived back home there was no bonus or dole, so how were they supposed to survive? The government had to do something to positive to address these concerns. ...read more.

Although, during 1937 there were around 47 000 strikes and about 80% were settled in favour of the workers. Another aim of the New Deal was to improve the lives of farmers. The New Deal did many things to try and do this such as raising prices, encourage soil conservation and provide loans to purchase equipment. However, small farmers saw little benefit from this. The most recognisable failure of the New Deal is that it did not do much to help families who were living in poverty; it did not improve the poor people's position in American society. The only two organisations that helped people who were living in poverty were the Emergency Relief, who prevented people from starving and provided jobs for as many as the unemployed as possible, also the Social Security Act of 1935 began to set up a system of national insurance. Overall, I think that the New Deal was a success to some extent, because it did have many benefits, also it did help America greatly by helping people out of poverty and helping America out of the Great Depression. However, there were also many knock on effects as a result of Roosevelt's actions and policies, for example employers did not agree to his policies which lead to 'the Memorial day massacre,' although not every one can always be pleased. I believe that the New Deal was mainly a success, because it did more good than harm, and it did benefit America greatly. ...read more.