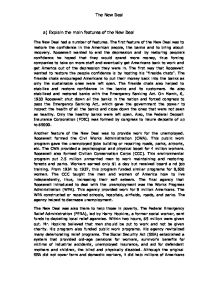 a) Explain the main features of the New Deal The New Deal had a number of features. The first feature of the New Deal was to restore the confidence in the American people, the banks and to bring about recovery. Roosevelt wanted to end the depression and by restoring people's confidence he hoped that they would spend more money, thus forcing companies to take on more staff and eventually get Americans back to work and get America out of the depression they were in. The first way that Roosevelt wanted to restore the people confidence is by hosting his "fireside chats". The fireside chats encouraged Americans to put their money back into the banks as only the sustainable ones were left open. The fireside chats also helped to stabilize and restore confidence in the banks and its customers. He also stabilized and restored banks with the Emergency Banking Act. On March, 6, 1933 Roosevelt shut down all the banks in the nation and forced congress to pass the Emergency Banking Act, which gave the government the power to inspect the health of all the banks and close down the ones that were not seen as healthy. Only the healthy banks were left open. Also, the Federal Deposit Insurance Corporation (FDIC) ...read more.

Also, people had stopped spending as much and the economy was in danger. To deal with this Roosevelt started the fireside chats which persuaded people to put their money back into the banks. Secondly, Roosevelt introduced the New Deal to provide work for the unemployed. As a result of the depression companies were cutting down on expenses which meant they started to lower the number of staff they had. The economy was suffering because people had stopped spending. As a result of this millions of people were now unemployed and out of money. To help them Roosevelt set up a number of agencies to deal with the unemployment. Most of these agencies gave the unemployed jobs like building or repairing roads, parks, airports, etc which paid little but got them spending. Roosevelt also introduced the New Deal to help those that were in poverty. As a result of the depression a lot of Americans were now in poverty. To help them Roosevelt set up agencies which gave money out to the people who were old, disabled, looking for work or in desperate need of money. Also, Roosevelt introduced the New Deal to help farmers. The depression meant that farmers produce was lowering in price and the value of their farm was decreasing because of over production. ...read more.

Overall, it must be noted that alongside the successes such as restoring banks and the work of the WPA were several problems. For example, big businesses still held enormous power relative to workers and even though America was producing huge amounts during the war, she only just managed to come out of the depression. Also, I believe that the New Deal was a mistake as Roosevelt didn't solve any problems as it was WWII that got America out of depression because it increased employment opportunities. Finally, agencies helped mainly the poor, unemployed, elderly and the banks of America. All these agencies did different things such as: building schools, building roads, dams, airports etc and this helped the unemployment because it gave the unemployed jobs and they made homelessness go down by making soup kitchens and giving blankets. He made sure that there was a small percentage as possible of homeless people and he had achieved that, he also helped farms and farmers who were having trouble and he helped them pay their mortgages. He gave nationwide speeches to help build their confidence and get them back on their feet and to make them feel involved. This shows that he helped America emotionally because he had helped them bring themselves out of the consequences of the Great Depression and the Wall Street crash. ?? ?? ?? ?? The New Deal ...read more.