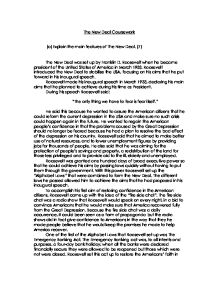 The New Deal Coursework The New Deal was set up by Franklin D. Roosevelt when he became president of the United States of America in March 1933. Roosevelt introduced the New Deal to stabilise the USA, focusing on his aims that he put forward in his inaugural speech. Roosevelt made his inaugural speech in March 1933, declaring his main aims that he planned to achieve during his time as President. During his speech Roosevelt said: "The only thing we have to fear is fear itself." He said this because he wanted to assure the American citizens that he could reform the current depression in the USA and make sure no such crisis could happen again in the future. He wanted to regain the American people's confidence in that the problems caused by the Great Depression should no longer be feared because he had a plan to resolve the bad effect of the depression on his country. Roosevelt said that he aimed to make better use of natural resources, and to lower unemployment figures by providing jobs for thousands of people. ...read more.

The Emergency Banking Act abolished Americans fears that their savings were not secure and let them put their trust back into the banks where they kept their money. Another program that Roosevelt set up was the Federal Emergency Relief Administration which was established to provide benefits for the unemployed. The basis of the program was that the government would give a dollar for every three dollars that the state spent; this was supposed to give people confidence that the unemployed would be given enough money to live on until a job opportunity came about. The fact that the Government was showing interest in the well-being of American people, made people believe even further that it was a strong, caring government system that took into account minorities and those in need. The Federal Emergency Relief Administration was later changed to the Civil Works Administration which was a project set up with five hundred million dollars backing from the Government, which was spent on public work schemes. ...read more.

The TVA was set up in order to provide economic development in the Tennessee Valley, where many people were affected greatly by the Great Depression. It concentrated on building dams to prevent flooding and to regain land around the Tennessee River and also on electricity generation and the manufacturing of fertilizer as a source of income. Roosevelt also set up other organisations to tackle other problems such as The Social Security Act that gave aid to the ill, elderly and unemployed; and the National recovery Administration that ensured working conditions were acceptable for everyone and to abolish over working and child labour. In conclusion, Roosevelt covered all of his aims mentioned in his inaugural speech using his power to pass the Alphabet Laws in order to keep his promises that he made to the people of America. The features of the New Deal came together to successfully meet Roosevelt's initial aims as President, as he made a benefit of the environmental state of the USA by using natural resources to boost the economy and provide employment for many people, effectively killing two birds with one stone. ...read more.