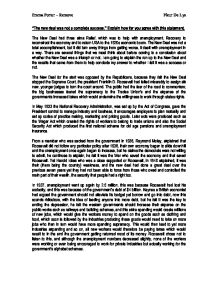 The new deal was not a complete success.&quot; Explain how far you agree with this statement. The New Deal had three aims Relief, which was to help with unemployment

"The new deal was not a complete success." Explain how far you agree with this statement. The New Deal had three aims Relief, which was to help with unemployment, Recovery to reconstruct the economy and to return USA to the 1920s economic boom. The New Deal was not a total accomplishment, but it did turn away things from getting worse, it dealt with unemployment in a way. There are several things that we must think about before coming to a conclusion about whether the New Deal was a triumph or not, I am going to explain the run up to the New Deal and the results that came from them to help conclude my answer to whether I felt it was a success or not. The New Deal for the start was opposed by the Republicans, because they felt the New Deal stopped the Supreme Court, the president Franklin D. Roosevelt had failed miserably to assign six new, younger judges to turn the court around. The public had the fear of the road to communism; the big businesses feared the supremacy to the Trades Union's and the expense of the governments increased taxes which would undermine the willingness to work through states rights. In May 1933 the National Recovery Administration, was set up by the Act of Congress, gave the President control to manage industry and business, it encourages employers to plan mutually and set up codes of practice making, marketing and pricing goods. Later acts were produced such as the Wager Act which created the rights of workers to belong to trade unions and also the Social Security Act which produced the first national scheme for old age pensions and unemployment insurance. ...read more.

The land was in an eroding state and ruined from winter rain which caused floods. The Tennessee Valley Authority was set up to stop this or decrease it, hopefully bring back electricity and make the land fertile again. It was decided building dams would be the essential aim of the programme. This gave out thousands of jobs, therefore helping decrease the numbers of the unemployed, in all due to filling up the TVA with jobs, therefore getting all the work done, it provided twenty new dams six hundred and fifty miles of waterways and several reforestation programmes. The workers gained a lot from the work, even physical improvements i.e. their muscles grew harder, bodies filled out and their self respect got rightfully returned. The workers also learned about trades, and most importantly they learnt more about their country and fellow civilians, they gained new skills in trade, industry, and life. Hundreds of thousands of square miles of ruined farmland were reclaimed and thousands of square miles added to the national parks, jobs had been created for millions of desperate people and help given to the poor. In 1938 Roosevelt had the congress to pass the Fair Labour Standards act, to tense up its law on the child labour act and the then establish a national minimum wage for all of those working in inner state companies. This was seen as the last significance of the New Deal, and the supremacy of the President greatly increased. The government accepted that they must have been somewhat to blame for the welfare, health and safety of all the American ...read more.

I think it could have worked more positively if people were prepared to present a little more give and take, i.e. more help to the unemployed, would give more help to the government. Finally I think, the New Deal bought a lot of controversy to America and therefore causing many people to suffer in the long run however also helped improve many areas around America such as the unemployment decreasing by supplying people with jobs all over whether it being within the Tennessee Valley or by being asked for the war in areas such as weaponry or machinery. Many of the Americans got pay rises also after getting their jobs, but however it does show America were still suffering with some issues such as the sit down strikes, Hoover-villes and the dust bowl. Overall I do think the New Deal had a great mixture of effects on the U.S.A, and some being successes and some being failures. I do not think they should be blamed for trying it as a new scheme to America and it was expected to have some problems and not to work perfectly therefore I do not believe it was a complete success but in the long run helped America. Many people expectedly and probably considered the New Deal a start to a down fall but I feel the only reason it had its main problems was because people were not prepared to work together. If more people had, had faith in the deal and the results it could outcome I feel the new deal could have been a lot stronger. ?? ?? ?? ?? Emma Porter - Remove Fleur De Lys ...read more.