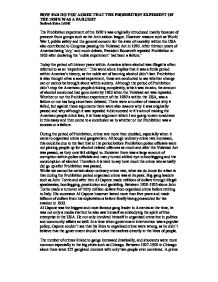 The Prohibition experiment of the 1920's

The Prohibition experiment of the 1920's was originally introduced mainly because of pressure from groups such as the Anti-saloon league. However reasons such as World War I, public safety and the general concern for the state of morality within the USA also contributed to Congress passing the Volstead Act in 1920. After thirteen years of America being 'dry,' and much debate, President Roosevelt repealed Prohibition in 1933 after declaring the 'noble experiment' had been a failure.' Today the period of thirteen years within America where alcohol was illegal is often referred to as an 'experiment.' This word alone implies that it was a futile period within America's history, as the noble act of banning alcohol didn't last. Prohibition is also thought of as a social experiment, these are conducted to see whether change can or cannot be brought about within society. Although the period of Prohibition didn't stop the American people drinking completely, which was its aim, the amount of alcohol consumed had gone down by 1933 when the Volstead act was repealed. Whether or not the Prohibition experiment of the 1920's within the USA, was a failure or not has long since been debated. There were a number of reasons why it failed, but against these arguments there were also reasons why it was originally passed and why although it was repealed it did succeed in it's ...read more.

There was not enough money within the system to ensure that government officials were properly paid and could put money into crime busting operations. The coast of the USA stretches for eighteen thousand seven hundred miles, an impossible amount of land to patrol successfully. At the most there were only two thousand eight thousand and thirty-six Prohibition agents; most of who were riddled with corruption, to ensure that alcohol was not smuggled across this vast stretch of land. They were only paid $2,500 per year to ensure that an industry worth two billion dollars did not prosper. People involved in organised crime easily bribed these poorly paid prohibition agents with the amount of money that was made in the industry of selling illegal alcohol. Ten percent of Prohibition agents were fined for corruption between 1920-30, the agents were not being paid enough which allowed them to be bribed by gangs and turn a blind eye to all the illegal activity that was going on. In 1924 alone forty million dollars worth of alcohol, only five percent of the amount being sold was intercepted. This proved that the volume of the business was immense and the number of Prohibition agents employed was simply not enough. From 1920 drinking alcohol was prohibited, however the consumption of alcohol for medicinal purposes was still allowed. ...read more.

the number of drink related deaths going down until then and then shooting back up in 1923, when the death rate became 3.2 per 100,000 people. From the very start of Prohibition, the government didn't put as much effort into maintaining the Volstead Act as they should have, the low number of officers employed to ensure that the law was maintained were under paid making them easy target for bribery. This is another key reason as to why Prohibition failed. Although the period of Prohibition failed to keep America completely 'dry,' the amount of alcohol consumed did fall and by more than half by 1933, many historians argue that this is Prohibition succeeded, as although drinking didn't cease completely it did decrease. The Prohibition experiment of the 1920's was a failure, because of lack of effort the government put into maintaining it. There was not enough money in the system and officers were poorly paid and allowed large gangs to spring up. The demand for it by the societies of American also made it fail. Although the experiment succeeded in brining down the drinking rate in the USA, it did not achieve in stopping it completely, which was its aim, therefore it did not succeed in its aim and consequently failed. HOW FAR DO YOU AGREE THAT THE PROHIBITION EXPERIENT OF THE 1920'S WAS A FAILURE? Nadirah Kaba L6DK ...read more.