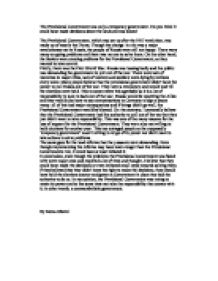 The Provisional Government was only a temporary government. Do you think it could have made decisions about the land and war issues facing Russia?

They were a temporary and would wait till the elections were held. This to some extent this agreeable as it is a lot of responsibility to take to back out of the war. Russia would be upsetting the Allies and they would also have to pay compensations to Germany to sign a peace treaty. all of this had major consequences and if things didn't go well, the Provisional Government would be blamed. On the contrary, I personally believe that the Provisional Government had the authority to pull out of the war but they just didn't want to take responsibility. ...read more.

In conclusion, even though the problems the Provisional Government was faced with were major ones and required a lot of time and thought, I believe that they could have made the decisions or even initiated small steps towards solving them. if they believed that they didn't have the right to make the decisions, they should have held the elections sooner and gotten a Government in place that had the authority to do so. In my opinion, the Provisional Government was trying to retain its power and at the same time not take the responsibility that comes with it; in other words, a somnambulistic government. By Zeena Oberoi ...read more.