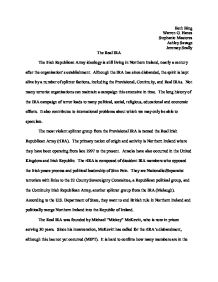 Beth Bing Warren G. Hanes Stephanie Mastores Ashley Savage Jeremey Scally The Real IRA The Irish Republican Army ideology is still living in Northern Ireland, nearly a century after the organization's establishment. Although the IRA has since disbanded, the spirit is kept alive by a number of splinter factions, including the Provisional, Continuity, and Real IRAs. Not many terrorist organizations can maintain a campaign this extensive in time. The long history of the IRA campaign of terror leads to many political, social, religious, educational and economic effects. It also contributes to international problems about which we may only be able to speculate. The most violent splinter group from the Provisional IRA is named the Real Irish Republican Army (rIRA). The primary nation of origin and activity is Northern Ireland where they have been operating from late 1997 to the present. Attacks have also occurred in the United Kingdom and Irish Republic. The rIRA is composed of dissident IRA members who opposed the Irish peace process and political leadership of Sinn Fein. They are Nationalist/Separatist terrorists with links to the 32 County Sovereignty Committee, a Republican political group, and the Continuity Irish Republican Army, another splinter group from the IRA (Melaugh). According to the U.S. Department of State, they want to end British rule in Northern Ireland and politically merge Northern Ireland into the Republic of Ireland. The Real IRA was founded by Michael "Mickey" McKevitt, who is now in prison serving 30 years. Since his incarceration, McKevitt has called for the rIRA's disbandment, although this has not yet occurred (MIPT). It is hard to confirm how many members are in the rIRA, but most sources estimate between 100 and 200, with approximately 40 members in prison. The group predominantly participates in bombings, especially car bombs; however, the U.S. Department of State says they have also been involved in robberies and assassinations. Their targets include the police in Northern Ireland, Protestant communities in Northern Ireland, the British military, and civilians, according to the State Department. ...read more.

In the process of trying to make the violence a criminal law reaction the RUC, Royal Ulster Constabulary, was created. It was aimed to be a neutral civil power. Military force was limited to extreme emergencies, and they were generally used to augment police force (White 196). This form of control is being held at the present and has seemingly been the most successful. White concludes the subject best: There is no doubt that many human rights abuses occurred. However, security force policy evolved and eventually helped calm a tremendously complex, violent situation. Additionally, the increased competence of security forces seemed to result in a less confrontational attitude...(197). The IRA terrorists have been fighting for 30 years for the unification of Ireland. They do not like the British influence and control over Northern Ireland. However, the Protestant North wants to remain unionist and keep British rule. Even the separation of Ireland, giving the southern republicans their own territory to rule, is not sufficient for the IRA. They want complete unification of Ireland. This division of thought in Ireland has led to corruption of democracy in Northern Ireland. In the mid 1900's there were many civil rights movements to try and restore Catholic representation in the North. According to Kevin Kelly, author of The Longest War: Northern Ireland and the IRA, "The reforms sought in the North were really only the minimal requirements for any society claiming to operate in accordance with reasonably egalitarian criteria" (99). The IRA was not fighting for democracy; they were more for a socialist-nationalist identity. However, the repression in the North of their fellow Catholic brothers increased the hatred the British Parliament, and increased the violent resistance. In the early 1990's the IRA began to realize that their use of violence was not helping their cause. After thirty years of violence, and the coming of the present age, violence was not as effective. ...read more.

Violence is not limited to fights between students, as attacks on teachers also frequently occur in some schools. Teachers are instructed not to discuss the happenings outside the walls of the school, and in a school environment where community tensions influence the day to day operation of the school and where violence and threats are not uncommon, this may perhaps be an understandable limit set by the teachers. Testing results from these schools has also decreased in wake of the political turmoil. Teachers' time and energy, in many occasions, is being spent on dealing with disruptive students, at the expense of their educational goals (Smyth 46). The black market and petty crime were so much the norm in some areas that they presented an alternative way of earning a living for young people excluded from schools and therefore they required no educational qualifications (Barry). "However, the cease fires, the peace process and the consequent influx of European Peace and Reconciliation Funding was seen to have provided some relief for this doubtful scene" (Smyth 47). European money had increased education and employment opportunities for young people in some areas. In common with many other institutions in Northern Ireland, schools seem to maintain a form of silence about issues of division and conflict. The Real Irish Republican Army has not had many appreciable links internationally. Most of the general IRA's global ties come through the Provisional branch. The pIRA is also believed to be "involved in the training of revolutionary groups such as the Revolutionary Armed Forces of Colombia (FARC)" (Peters). Connections have also been cited between the Provisionals and regimes in Iran and Libya. In 1987, "the French police...intercepted a ship carrying a small yet sophisticated arsenal from Libya to the Provisional Irish Republican Army" (Peters). IRA-Libyan operations have been nicknamed the "Green-Green Alliance," due to the color of the Libyan flag. Lastly, funds to support legal assistance for prisoners and their families have filtered in from Irish descendants in the USA, Canada, and Australia. ...read more.