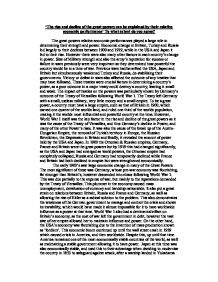 'The rise and decline of the great powers can be explained by their relative economic performance' To what extent do you agree?

'The rise and decline of the great powers can be explained by their relative economic performance' To what extent do you agree? The great powers relative economic performances played a large role in determining their strength and power. Economic change in Britain, Turkey and Russia led largely to their declines between 1900 and 1919, while in the USA and Japan it led to their rise. However there were also many other factors in each country's change in power. Size of Military strength and also the army's reputation for success or failure in wars previously were very important as they determined how powerful the country would be in a time of war. Previous wars had benefited the USA, Japan and Britain but simultaneously weakened Turkey and Russia, de-stabilising their governments. Victory or defeat in wars also affected the outcome of any treaties that may have followed. These treaties were crucial factors in determining a country's power, as a poor outcome in a major treaty could destroy a country, leaving it small and weak. The impact of treaties on the powers was particularly shown by Germany's outcome of the Treaty of Versailles following World War 1. The Treaty left Germany with a small, useless military, very little money and a small empire. To be a great power, a country must have a large empire, such as that of Britain in 1900, which owned one quarter of the worlds land, and ruled one third of the worlds population, making it the worlds most influential and powerful country at the time. However, World War 1 itself was the key factor in the rise and decline of the great powers as it was the cause of the Treaty of Versailles, and thus Germany's decline in Power, and many of the other Power's rises. It was also the cause of the break up of the Austro-Hungarian Empire, the removal of Turkish territory in Europe, the Russian Revolution, the Depression in Britain and finally, it revealed the amount of power held by the USA and Japan. ...read more.

Despite these treaties being the cause of imperial and financial loss in many of the world powers, and therefore a decrease in their power and influence, they were drawn up as a result of conflict that had to be resolved. This of course means that they were a solution to wars, such as the Balkan League wars, the Russio-Turkish war, the three wars over Latin America, the Russio-Japanese war and of course World War 1. Russia was especially involved in two wars in the lead up to World War 1. The first of these was the Russio-Turkish war, when Russian troops invaded to help the Christians who were being ill-treated in Turkey. Britain threatened war on Russia, which forced an end to the attack and the signing of the Treaty of San Stefano. As aforementioned this treaty had enormous impact on Turkeys status as a world power, with its size and influence plummeting as a result of this war. The Russians in stark contrast benefited, gaining Kars and Batum. Russia did not however, benefit from the 1905 Russio-Japanese war, which it lost. This failure led promptly to a revolution, where the Tsar (King) was forced to give up power to the Duma (parliament). This unrest, in conjunction with it's poor economy, flailing reputation due to its defeat, and the fact that it had to give land to Germany as a result, lost a great deal of Russia's power. She barely managed to maintain her empire, and her status as a world power plummeted. Japan meanwhile gained all of Russia's Chinese territory, which, in addition to their own, gave her and emormous influence in that area thus rapidly increasing her power. Completely independently to this unrest, the USA had captured Hawaii in 1877 and built Pearl Harbour, a major naval base giving her an even greater military standing. In 1899, the USZ defeated Spain in a war over the ownership of Cuba. ...read more.

In the following inter-war years, naval rivalry between the USA and Japan grew as both countries fought for power in the Pacific. In this way, World War 1 gained Japan power, until she was powerful enough to defeat Manchuria in China, and finally attack Pearl Harbour in 1941. Therefore, in conclusion, although economic change was important in determining the rise and decline of the great powers, it is clear that the key factor was World War 1, as it affected every other aspect that determined the countries relative powers. The War affected every Power's economy greatly, bankrupting Turkey, Russia and Germany, causing economic problems in Britain whilst improving the economy of the USA and Japan. This was mostly due to the effects of the Treaty of Versailles, which in turn was put in place because of the war. The treaty also reduced Germany's military and empire, and Turkey's empire to the benefit of its neighbouring countries, to Britain, the USA and Japan. There were also other treaties that came as a result of the war, such as the Treaty of Sevres, which led to the final reduction in the Ottoman Empire, limiting Turkey to Constantinople and some surrounding areas. The Ottoman Empire collapsed as a consequence and never recovered. The war caused much of the unrest in Russia, allowing political extremism to take hold as in Germany, setting the scene for much of the conflict that was to follow in the following years. Where previous wars affected only one or two countries at a time, World War 1 had enormous impact on over 30 countries including every one of the great powers. It led to either a rise or decline in power in each of them, hence it was the greatest single cause of changes in power in the early 1900's, and set the pattern the arrangement of power that was to follow in the years succeeding it. ...read more.