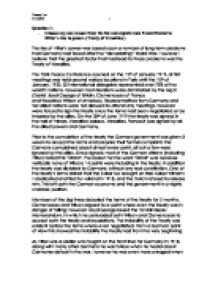 The rise of Hitlers power was based upon a number of long term problems that Germany had faced after the devastating World War. However I believe that the greatest factor that had lead to these problems was the Treaty of Versailles.

Question 1: - Choose any one reason from the list and explain how it contributed to Hitler's rise to power. (Treaty of Versailles ) The rise of Hitler's power was based upon a number of long term problems that Germany had faced after the "devastating" World War. However I believe that the greatest factor that had lead to these problems was the Treaty of Versailles. The Paris Peace Conference opened on the 12th of January 1919, at first meetings was held around various locations in Paris until the 10th of January, 1920. 32 international delegates represented over 75% of the world's nations, however most decisions were dominated by the big 3 (David Lloyd George of Britain, Clemenceau of France and Woodrow Wilson of America). Representatives from Germany and her allied nations were not allowed to attend any meetings, however were forced to sign the treaty once the terms had been negotiated or be invaded by the allies. On the 28th of June 1919 the treaty was signed, in the hall of mirrors, Versailles palace, Versailles, France.it was signed by all the allied powers and Germany. Prior to the completion of the treaty the German government was given 3 weeks to accept the terms and prepare their formal complaint, the Germans complained about almost every point, all but a few were ignored by the allies. Once signed, most of the German citizens (including Hitler) hated this 'Diktat'. The reason for the word 'Diktat' was because vertically none of Wilsons 14 points were including in the treaty, in addition the treaty was dictated to Germans, without any real constitution. One of the treaty's terms stated that the Kaiser be brought on trial. Kaiser Wilhelm II abdicated and fled to Holland in 1918, and the Dutch refused to release him. This left both the German economy and the government in a highly unstable position. Members of the big three debated the terms of the treaty for 5 months. ...read more.

Hitler used many motivational speeches to persuade people to join the Nazi's. Hitler's Oratory, personality and leadership skills are all a long term cause which took years to have been developed. Many historians believed Hitler's strange personality and incredible Oratory skills developed as a side effect of being shell shocked in the war. They believe the explosion could have altered his vocal chords resulting in his well-known passionate speeches. Hitler was able to use the passionate voice and dramatic bodily gestures which he had used so effectively in his speeches, to convey his messages. Whilst in the army Hitler's officers found his left winged ideas incredibly impressive, he was set the task of political officer informing soldiers about politics. Prior to giving a speech Hitler always arrived late, he believe that this would create and atmosphere of tension and expectance amongst his audience. In the early months of Hitler's speeches He spoke haltingly and appeared nervous. However as the months progressed Hitler relaxed, and his speech delivery style had changed. He was known to rock from side to side and began gesticulating with hand gestures. As he progressed his volume and passion increased, and his voice cracked with emotion. He ranted about the injustice Germany had faced and played with the audience's emotion. Towards the end of his speeches the almost hypnotics voice engaged the audience to listen to whatever he had suggested. After Gustav Stresemann was appointed chancellor on the 13th of august 1923, he decided continue paying reparations to the allies once more. Hitler was now determined it was time he became the new leader of Germany. On the night of November the 8th 1923, whilst the Bavarian government held a meeting in the Munich beer hall Hitler along with members of the storm troopers stormed into the beer hall disrupting the meeting. The leader of the Bavarian Government were reluctant to support him at first, however after Hitler had threatened them they agreed to support him on his new quest. ...read more.

Franz Von Papen was chancellor of Germany at the time; however the Reichstag had not given him the support he needed as a result Hindenburg and Von Papen had to rule Germany under the Enabling act. Hitler had been offered the position of Vice-Chancellor in exchange for his support, the proposal was rejected Hitler demanded to be made Chancellor. Von Papen and Hindenburg appointed Hitler Chancellor on the 30th of January 1933, they took the risk because they had believed they would be able to control him- they were wrong. The death of Hindenburg in August 1934 allowed Hitler to combine the roles of both President and Chancellor, he renamed himself the Fuehrer. On the 23rd of March 1933 elected representative voted on Hitler's enabling act. This act would give Hitler dictatorial powers and could rule Germany without the Reichstag's consent, however in order to obtain such powers two thirds of the Reichstag would have to agree to pass the act. In which it did, Hitler now took over all the trade unions, all political parties were banned, all the leaders of such groups were sent to Concentration camps. However it was not only leaders of trade unions and political parties that were sent to the camps, The Gestapo also began arresting beggars, prostitutes, homosexuals, alcoholics and anyone who was incapable of working. In my opinion the decision by Papen and Hindenburg to appoint Hitler as Chancellor in 1933, was the cause that played the most significant role. Although it is hard to distinguish important of causes I believe this one was most significant. On the other hand in order for this decision to have been made Hitler would have had to prove he was worthy. In my opinion without the causes stated above he would not have been appointed Chancellor, Therefore wouldn't not have been able to use the enabling act in the final process of turning into history's most infamous dictator. Hitler's quotes : http://www.hitler.org/writings/Mein_Kampf/mkv2ch06.html http://www.bbc.co.uk/dna/h2g2/alabaster/A828317 http://www.johndclare.net/Weimar7.htm http://www.spartacus.schoolnet.co.uk/GERhitler.htm http://www.spartacus.schoolnet.co.uk/GERhugenberg.htm ?? ?? ?? ?? Henry Lin H1AKN 1 ...read more.