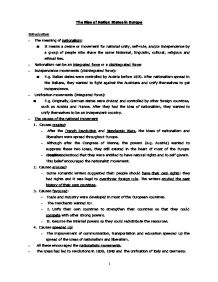 The Rise of Nation States in Europe

The Rise of Nation States in Europe Introduction - The meaning of nationalism: * It means a desire or movement for national unity, self-rule, and/or independence by a group of people who share the same historical, linguistic, cultural, religious and ethical ties. - Nationalism can be an integrated force or a disintegrated force: - Independence movements (disintegrated force): * E.g. Italian states were controlled by Austria before 1870. After nationalism spread in the Italians, they wanted to fight against the Austrians and unify themselves to get independence. - Unification movements (integrated force): * E.g. Originally, German states were divided and controlled by other foreign countries, such as Austria and France. After they had the idea of nationalism, they wanted to unify themselves to be an independent country. - The causes of the national movement 1. Causes created: - After the French Revolution and Napoleonic Wars, the ideas of nationalism and liberalism were spread throughout Europe. - Although after the Congress of Vienna, the powers (e.g. Austria) wanted to suppress these two ideas, they still existed in the heart of most of the Europe countries. - People understood that they were entitled to have natural rights and to self govern. This belief encouraged the nationalist movement. 2. Causes aroused: - Some romantic writers suggested that: people should have their own rights: they had rights and it was legal to overthrow foreign rule. The writers studied the past history of their own countries. 3. Causes favoured: - Trade and industry were developed in most of the European countries. - The merchants wanted to: - I. Unify their own countries to strengthen their countries so that they could compete with other strong powers. - II. Resume the internal powers so they could redistribute the resources. 4. Causes speeded up: - The improvement of communication, transportation and education speeded up the spread of the ideas of nationalism and liberalism. ...read more.

acted as the 'honest broker' (he acted as a mediator because he had no interest in the Balkans) to arrange a meeting --- the Congress of Berlin in 1878. * The arrangement in the Congress of Berlin (1878) * 1: The Big Bulgaria was trisected into: * Bulgaria, Macedonia and Eastern Rumelia * Bulgaria gained independence. * Macedonia was given to Turkey. * Eastern Rumelia became an autonomous state (they could determine their own internal affairs) under Turkish control. * 2: Britain got lands in the island of Cyprus * Austria administered (controlled but not completely controlled) Bosnia and Herzegovina. * Russia was compensated for Bessarabia and places in Caucasus. * Serbia, Montenegro and Rumania gained independence. * Turkey promised to carry out reforms (giving religious freedom to the Balkan states) * The Congress of Berlin influenced the relationship between Russia, Britain, Austria and Germany. - Complete independence of Bulgaria * Relationship with Russia * Bulgaria got independence after the Congress of Berlin in 1878, Russia still tried her best to intervene Bulgaria. Lots of conflicts aroused. * In 1853, Bulgaria succeeded to ask Russian ministers in Bulgaria to resign. * Relationship with Eastern Rumelia * Eastern Rumelia became an autonomous state, but she was still controlled by Turkey. * Eastern Rumelia started war to fight against Turkey and wanted to unite with Bulgaria. * Both Russia (took no action) and Serbia (sent army but failed) opposed. * Britain and Austria were pleased to see a strong Bulgaria to contain the expansion of Russia. * In 1886, Ferdinand of Saxe-Coburg became the Prince of Bulgaria and carried out the policy of independence. In 1908, the powers recognized the independence of Bulgaria (union with Eastern Rumelia) and he became king. * Development of Bulgaria after independence * After the Balkan Wars, Bulgaria got some lands and increased in size. * Since Bulgaria had conflicts with Serbia (backed up by Russia), she began to make friends with Germany and Austria-Hungary. * Finally, Bulgaria joined the Central Powers and was defeated in WWI. 9 1 ...read more.