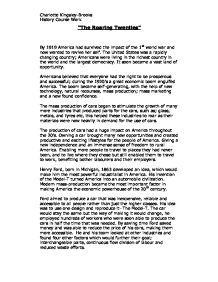 "The Roaring Twenties" By 1919 America had survived the impact of the 1st world war and now wanted to revive her self. The United States was a rapidly changing country; Americans were living in the richest country in the world and the largest democracy. It soon became a vast land of opportunity. Americans believed that everyone had the right to be prosperous and successful; during the 1920's a great economic boom engulfed America. The boom became self-generating, with the help of new technology, natural recourses, mass production; mass marketing and a new found confidence. The mass production of cars began to stimulate the growth of many more industries that produced parts for the cars, such as; glass, metals, and tyres etc, this helped these industries to roar as their materials were now heavily in demand for the use of cars. The production of cars had a huge impact on America throughout the 20's. Owning a car brought many new opportunities and created productive and exciting lifestyles for the people of America. Giving a new independence and an immense sense of freedom to rural America. Enabling more people to travel to places they had never been, and to live where they chose but still enabled them to travel to work, benefiting bother labourers and their employers. Henry Ford, born in Michigan, 1863 developed an idea, which would make him the most powerful industrialist in America. ...read more.

By 1929, 10 million women were employed. The money they were earning gave them a new found freedom and independence, as they were now more self-reliant than they had ever been before. Middle class women could also now afford to buy household items such as; vacuums and washing machines, making their household tasks easier. As women were now earning a living of their own, they quickly became the target of advertising, helping to increase sales. However, although women were now able to work, they were still lower paid than men, employee's were inclined to employ them as they were seen as a source of cheap labour. As opportunities began to change for women, so did their life styles and appearance. Some young women began to show off their newfound freedom- know as "Flappers", showing that they could behave as they wished. They began to wear a great deal of make-up, cut their hair, dress as they had never done before in short skirts and low back gowns. Socially they began to rebel, having open relationships with men, drinking and smoking in public, behaving "inappropriately". They became "daring and provocative". Although their elders were appalled at such behaviour, the new women of the 20's began to enjoy challenging old expectations. During the 1920's a whole new world of entertainment began to engulf America, people wanted to forget about the war and enjoy themselves. Cinemas became increasingly popular and proved to provide a great source of entertainment. ...read more.

Through out the 1920's the horrifying acts of the Klu Klux Klan flourished as the klan spread further than south with its constantly growing three million members. The members of the klan were thoroughly disguised, wearing long white hooded cloaks concealing their faces and bodies. They swept through towns and villages terrorising and murdering all blacks, Jews and Catholics in their path. "Fighting for native white protestant supremacy" Blacks suffered horrifically with nowhere to seek help, lacking the support of police, as many of them were secretly members of the klan themselves. Others who were not part of the klan chose to turn a blind eye to the racial hatred which continued to roar through out the 1920's. After 1925, the klan members began to decline due to the onset of the Great Depression. This period failed to roar for many people. Six million families had an income of less than $1000 a year. The government provided no welfare support for these people. Agriculture suffered greatly as prices fell to the advantage of the consumer, many farmers began to leave their farms and hometowns, as the new life of the city began to beckon them, offering a more prosperous future. Although the conditions for blacks improved slightly, a great deal of racial discrimination and general poverty remained largely overlooked. However, over all the 1920's certainly roared for the majority of American's, creating a great mark in American History. They were living lives of great change, prosperity and success. Charlotte Kingsley-Brooks History Course Work ...read more.