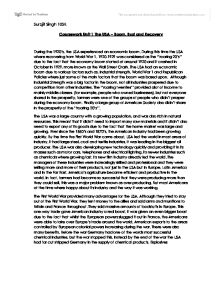 During the 1920's, the USA experienced an economic boom. During this time the USA where recovering from World War 1. 1920-1929 was considered as the ''roaring 20's'' due to the fact that the economy boom started at around 1920 and it crashed in October in 1929, more known as the Wall Street Crash. The USA had an economic boom due to various factors such as, industrial strength, World War 1 and Republican Policies where just some of the main factors that the boom was based upon. Although Industrial Strength was a big factor in the boom, not all industries prospered due to competition from other industries. The ''roaring twenties'' provided alot of income to mainly middle classes- (for example, people who owned businesses), but not everyone shared in the prosperity, farmers were one of the groups of people who didn't prosper during the economy boom. Finally a large group of American Society also didn't share in the prosperity of the ''roaring 20's''. The USA was a large country with a growing population, and was also rich in natural resources. This meant that it didn't need to import many raw materials and it didn't also need to export any of its goods due to the fact that the home market was large and growing. Ever since the 1860's and 1870's, the American Industry had been growing quickly. ...read more.

The Republicans believed that if people kept their own money, they would spend it on American goods and wealthy people would re-invest their money in American industries. The fourth and final belief was ''Trusts'', trusts where large super-corporations, which dominated industry. This meant that trusts could have total control over a certain part of industry such as steel. The Republicans allowed the trusts to do what they wanted, believing that the 'captains of industry' knew better than politicians did what was good for the USA. Due to the fact the Republicans made these policies life for Americans was made better. Through the 1920's ''new industries and new methods'' of production were developed in the USA, this allowed them to exploit its vast resources of raw materials to produce steel, chemicals, glass and machinery. The products became the foundation of an enormous boom in consumer goods. Products such as Telephones, radios, vacuum cleaners and washing machines were produced mass-produced on a vast scale, making them cheaper so more people could buy them. New electrical companies such as Hoover became household names, they used the latest, most efficient techniques proposed by the 'Industrial Efficiency Movement'. At the same time many big industries used sales and marketing techniques to get people to buy their goods. Mass advertising over different states in America had been used in the First World War to get Americans to enlist in the American army. ...read more.

Also through this period unemployment remained a problem. The growth in industry in the 1920's did not create many new jobs. Industries were growing by electrifying or mechanising production. The same number of people was unemployed at the peak of the boom in 1929 as in 1920. Yet the amount of goods had doubled. These millions of unemployed were not sharing in the boom. This contained a greater proportion of blacks and Hispanic people compared to whites. This showed that the boom of the 1920's was a consumer led boom due to the fact that families where buying things for their homes. In conclusion although the USA was experiencing an economy boom during the 1920's, not all Americans got their fair share of prosperity. For example farmers where over producing food which meant that it became wasteful and was a waste of money, which led to a big rise in unemployment. Also alot of industries where in competition with each other such as textile industries, they couldn't compete with the man-made materials. The home market during the 1920's received big incomes because families where buying these things for their homes. Finally many factors helped contribute to the USA's economy boom in the 1920's,the boom was also referred to an 'consumer led boom'. ?? ?? ?? ?? Surbjit Singh 10SK Coursework Unit 1 The USA - Boom, Bust and Recovery ...read more.