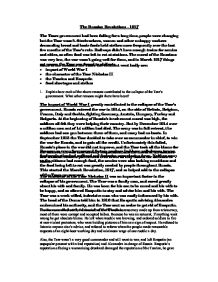 The Russian Revolutions - 1917 The Tsars government had been failing for a long time, people were changing but the Tsar wasn't. Steelworkers, women and other unhappy workers demanding bread and basic foods held strikes more frequently over the last few months of the Tsar's rule. Railways didn't have enough trains for armies and cities, so often food was left to rot at stations. The moral of the Russians was very low, the war wasn't going well for them, and in March 1917 things got worse, the Tsar was forced to abdicate. Some of the Reasons the Tsars Government went badly are: * impact of World War I * the character of the Tsar Nicholas II * the Tsarina and Rasputin * food shortages and strikes 1. Explain how each of the above reasons contributed to the collapse of the Tsar's government. What other reasons might there have been? The impact of World War I greatly contributed to the collapse of the Tsar's government. Russia entered the war in 1914, on the side of Britain, Belgium, France, Italy and Serbia, fighting Germany, Austria, Hungary, Turkey and Bulgaria. At the beginning of Russia's involvement moral was high, the soldiers all felt they were helping their country. But by December 1914 over a million men out of 14 million had died. The army was in full retreat, the soldiers had one gun between three of them, and many had no boots. ...read more.

The value of the rouble dropped and people found it harder and harder to get food. The letters families sent to soldiers told them of the problems, lowering their moral too and making them lose more and more hope in winning the war or even surviving it. The Duma's provisional committee refused to disband, and when officers ordered the soldiers to put down the revolt they refused. Some even shot their officers, and they demanded that the Duma took over the government. This didn't destroy the government alone, there had always been strikes and food shortages, it just helped make it collapse. Other possible reasons for why the government collapsed included the Tsar not keeping his word. Every time a Duma criticised him or the way he ran the country, he dissolved it. Then he changed the system so the Duma was full of his supporters. He had promised freedom of speech, but had the Okhrana (Secret Police) around constantly, censoring books, newspapers and sending his opponents to Siberia. He refused to listen to anybody's opinion or advice, and refused to acknowledge that his opponents (Bolsheviks and Mensheviks) were growing in strength. World War I caused most of these problems, if it hadn't happened then the Tsar wouldn't have left the Tsarina and Rasputin in control and their reputations wouldn't have been ruined. Food shortages and strikes wouldn't have got so out of hand, and if there was less pressure on the Tsar to win the war, maybe he would have been more willing to listen to other people. ...read more.

A big problem in Russia was a lack of land, causing lack of food, causing peasants to try and help themselves to aristocracy's land. The provisional government could have redistributed land to solve this problem, but instead did nothing except try to stop the peasants. If the government had solved this problem, good news would have been sent to the soldiers and the government's popularity would have increased. Moral would've heightened and the Bolsheviks would not have had so much more to offer than the Provisional Government. Because they did nothing they became more unpopular and caused more price rises. Then, they started to attack Russia to distract attention from problems at home. This just produced yet another problem for them to worry about and because they were defeated, the army deserted them. During riots in July 1917 many Bolsheviks were arrested and Lenin escaped to Finland in disguise. In September 1917 there was a Kornilov revolt, in which the Provisional Government had asked the Bolsheviks for help. Thus leading to the release of the arrested rioters and the return of Lenin. The Bolsheviks used the 'Red Guards,' a small group of well-organised, well-trained, well-disciplined soldiers controlled by one man, Leon Trotsky. The main reason for the collapse of the Provisional Government in November 1917 was because they stayed in the war far too long. This caused many other problems (such as food shortages and the starvation of 7 million people) They were also far too cautious and nothing really got done under their power, so their supporters turned to the Bolsheviks instead who took immediate action. ...read more.