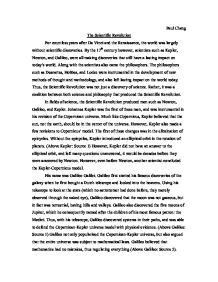 Paul Chang The Scientific Revolution For countless years after Da Vinci and the Renaissance, the world was largely without scientific discoveries. By the 17th century however, scientists such as Kepler, Newton, and Galileo, were all making discoveries that still have a lasting impact on today's world. Along with the scientists also came the philosophers. The philosophers such as Descartes, Hobbes, and Locke were instrumental in the development of new methods of thought and methodology, and also left lasting impact on the world today. Thus, the Scientific Revolution was not just a discovery of science. Rather, it was a coalition between both science and philosophy that produced the Scientific Revolution. In fields of science, the Scientific Revolution produced men such as Newton, Galileo, and Kepler. Johannes Kepler was the first of these men, and was instrumental in his revision of the Copernican universe. Much like Copernicus, Kepler believed that the sun, not the earth, should be in the center of the universe. ...read more.

(Above Galileo: Source 1) Galileo not only popularized the Copernican-Kepler universe, but also argued that the entire universe was subject to mathematical laws. Galileo believed that mathematics had no mistakes, thus regulating everything (Above Galileo: Source 2). Ironically born the day Galileo died, Newton was instrumental in the development of the Copernican-Kepler universe. Newton stressed the experimentation and mathematics as a way to discover truth (Above Newton: Source 3). Probably the biggest achievement of Newton was his discovery of gravity. Gravity, Newton argued, was why planets moved in an orderly rather than chaotic manner. Everything was affected by every other object through gravity. Thus, Earth's gravity pulled on the moon, the moon's gravity pulled on Earth, Earth pulled on people, and distant planets pulled on other planets (Above Newton: Source 4). Newton was also a mathematical genius, and has been attributed to be the founder of calculus. With calculus, mathematicians no longer had to perform incredibly "intricate geometric constructions" (Above Newton: Source 5). ...read more.

Much like his contemporary, John Locke was widely known as a political philosopher, and is widely known for his to works Treatise of Government and The Limits of Human Understanding. In Locke's Treatise, his criticism of an absolute government eventually paved the way for American political thought. Locke was also known as a humanistic philosopher. In his Limits of Human Understanding, Locke described the beginning of human mind as a blank slate. As man grew older, the slate was filled with more knowledge, etc. Much like Descartes, Locke's philosophical thinking aided in the breakdown of the accepted Aristotelian thinking, which in turn produced independent thought. (Above Locke: Source 8) Thus, as Galileo and his counterparts were discovering new facets of science, Locke and his fellow colleagues were introducing new thought and political philosophy. Therefore, the Scientific Revolution was in fact, two different revelations. It was a true Scientific Revolution, and it was a Philosophical Revolution. Because of the two, there was yet also the intertwining of both, creating new philosophical thought in science, as demonstrated by Descartes and Newton. ...read more.