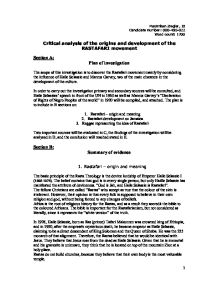 The scope of this investigation is to discover the Rastafari movement mainly by considering the influence of Haile Selassie and Marcus Garvey, two of the main charaters in the development of the culture

Maximlian Ziegler, IB Candidate number: 000-495-022 Word count: 1700 Critical analysis of the origins and development of the RASTAFARI movement Section A: Plan of investigation The scope of this investigation is to discover the Rastafari movement mainly by considering the influence of Haile Selassie and Marcus Garvey, two of the main charaters in the development of the culture. In order to carry out the investigation primary and secondary sources will be consulted, and Haile Selassies' speech in front of the UN in 1963 as well as Marcus Garvey's "Declaration of Rights of Negro Peoples of the world" in 1920 will be compiled, and attached. The plan is to include in B sections on: 1. Rastafari - origin and meaning 2. Rastafari development on Jamaica 3. Reggae representing the idea of Rastafari Two important sources will be evaluated in C, the findings of the investigation will be analysed in D, and the conclusion will reached stated in E. Section B: Summary of evidence 1. Rastafari - origin and meaning The basic principle of the Rasta Theology is the devine lordship of Emperor Haile Selassie I (1892-1975). The belief contains that god is in every single person, but only Haille Selassie has manifested the attribute of devineness. "God is Jah, and Haile Selassie is Rastafari". The fellow Christians are called "Rastas" who accept as true that the colour of the skin is irrelevant. However, their opinion is that every folk is supposed to believe in their own religion and god, without being forced to any changes of beliefs. Africa is the root of religious history for the Rastas, and as a result they accredit the bible to the coloured Africans. The bible is important for the Rastafarianism, but not considered as literally, since it represents the "white version" of the truth. In 1928, Haile Selassie, born as Ras (prince) Tafari Makonnen was crowned king of Ethiopia, and in 1930, after the empress's mysterious death, he became emperor as Haile Selassie, claiming to be a direct descendant of King Solomon and the Queen of Sheba. ...read more.

We know that this conflict will be won and that right will triumph. In this time of trial, these efforts should be encouraged and assisted, and we should lend our sympathy and support to the American Government today. "Last May, in Addis Ababa, I convened a meeting of Heads of African States and Governments. In three days, the thirty-two nations represented at that Conference demonstrated to the world that when the will and the determination exist, nations and peoples of diverse backgrounds can and will work together in unity, to the achievement of common goals and the assurance of that equality and brotherhood which we desire. "On the question of racial discrimination, the Addis Ababa Conference taught, to those who will learn, this further lesson: That until the philosophy which holds one race superior and another inferior is finally and permanently discredited and abandoned: That until there are no longer first-class and second class citizens of any nation; That until the color of a man's skin is of no more significance than the color of his eyes; That until the basic human rights are equally guaranteed to all without regard to race; That until that day, the dream of lasting peace and world citizenship and the rule of international morality will remain but a fleeting illusion, to be pursued but never attained; And until the ignoble and unhappy regimes that hold our brothers in Angola, in Mozambique and in South Africa in subhuman bondage have been toppled and destroyed; Until bigotry and prejudice and malicious and inhuman self-interest have been replaced by understanding and tolerance and good-will; Until all Africans stand and speak as free beings, equal in the eyes of all men, as they are in the eyes of Heaven; Until that day, the African continent will not know peace. We Africans will fight, if necessary, and we know that we shall win, as we are confident in the victory of good over evil. ...read more.

43. "We call upon the various governments of the world to accept and acknowledge Negro representatives who shall be sent to the said governments to represent the general welfare of the Negro peoples of the world." 44. "We deplore and protest against the practice of confining juvenile prisoners in prisons with adults, and we recommend that such youthful prisoners be taught gainful trades under humane supervision." 45. "Be it further resolved, that we as a race of people declare the League of Nations null and void as far as the Negro is concerned, in that it seeks to deprive Negroes of their liberty." 46. We demand of all men to do unto us as we would do unto them, in the name of justice; and we cheerfully accord to all men all the rights we claim herein for ourselves." 47. "We declare that no Negro shall engage himself in battle for an alien race without first obtaining the consent of the leader of the Negro people of the world, except in a matter of national self-defense." 48. "We protest against the practice of drafting Negroes and sending them to war with alien forces without proper training, and demand in all cases that Negro soldiers be given the same training as the aliens." 49. "We demand that instructions given Negro children in schools include the subject of 'Negro History', to their benefit." 50. "We demand a free and unfettered commercial intercourse with all the Negro people of the world." 51. "We declare for the absolute freedom of the seas for all peoples." 52. "We demand that our duly accredited representatives be given proper recognition in all leagues, conferences, conventions or courts of international arbitration wherever human rights are discussed." 53. "We proclaim the 31st day of August of each year to be an international holiday to be observed by all Negroes." 54. "We want all men to know we shall maintain and contend for the freedom and equality of every man, woman and child of our race, with our lives, our fortunes and our sacred honor." ?? ?? ?? ?? 1 ...read more.