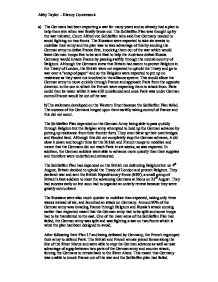 The stalemate developed on the Western Front because the Schlieffen Plan failed. The success of the Germans hinged upon them swiftly taking control of France and this did not occur.

a) The Germans had been expecting a war for many years and so already had a plan to help them win when war finally broke out. The Schlieffen Plan was thought up by the war minister, Count Alfred von Schlieffen who said that Germany needed to avoid fighting on two fronts. The Russians were expected to take six weeks to mobilise their army and the plan was to take advantage of this by sending the German army to defeat France first, knocking them out of the war which would leave German troops free to be sent East to help the Austrians defeat Russia. Germany would invade France by passing swiftly through the neutral country of Belgium. Although the Germans knew that Britain had sworn to protect Belgium in the Treaty of London, the British were not expected to uphold the Treaty and go to war ...read more.

They even blew up their own bridges and flooded land. Although this did not completely stop the German advance, it did slow it down and bought time for the British and French troops to mobilise and meant that the Germans did not reach Paris in six weeks, as was expected. In addition, the German soldiers were able to advance more quickly than their supplies and therefore were underfed and exhausted. The Schlieffen Plan had depended on the British not defending Belgium but on 4th August, Britain decided to uphold the Treaty of London and protect Belgium. They declared war and sent the British Expeditionary Force (BEF), a small group of Britain's best soldiers to meet the advancing Germans at Mons on 23rd August. They had success early on but soon had to organise an orderly retreat because they were greatly outnumberd The Russians were also much quicker to mobilise than expected, taking only three weeks instead of six, and launched an attack on Germany. ...read more.

This meant that Germany was unable to knock France out of the war and the Schlieffen plan had failed. In order to protect the land that they already owned, the Germans dug trenches and soon the British and French dug their own in order to protect themselves from shell fire and snipers. Both sides followed a "policy of encirclement" and tried to outflank the enemy lines. As the Germans moved rapidly towards the sea, the British and French moved troops to block them. The Allies and the Germans wanted to reach the sea and gain control of vital ports such as Dunkirk and Boulogne. For the next four years, the positions of the two sides hardly changed and there was a stalemate on the Western Front. ?? ?? ?? ?? Abby Taylor - History Coursework ...read more.