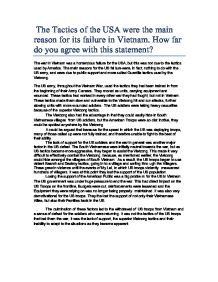 The Tactics of the USA were the main reason for its failure in Vietnam. How far do you agree with this statement?

The Tactics of the USA were the main reason for its failure in Vietnam. How far do you agree with this statement? The war in Vietnam was a horrendous failure for the USA, but this was not due to the tactics used by America. The main reasons for the US failure were, in fact, nothing to do with the US army, and were due to public support and more suited Guerrilla tactics used by the Vietcong. The US army, throughout the Vietnam War, used the tactics they had been trained in from the beginning of their Army Careers. ...read more.

It could be argued that because for the speed in which the US was deploying troops, many of those called up were not fully trained, and therefore unable to fight to the best of their ability. The lack of support for the US soldiers and the war in general was another major factor in the US defeat. The South Vietnamese were initially neutral towards the war, but as US tactics became more aggressive, they began to assist the Vietcong. This made it very difficult to effectively combat the Vietcong, because, as mentioned earlier, the Vietcong could hide amongst the villagers of South Vietnam. ...read more.

The US government was under huge pressure to end the war. This had direct impact on the US Troops on the frontline, Budgets were cut, reinforcements were lessened and the Equipment they were relying on was no longer being properly maintained. It was also very demotivational for the US troops. They the lost the support of not only their Vietnamese Allies, but also their Families back in the US. The culmination of these factors led to the withdrawal of US troops from Vietnam and a sense of defeat for the soldiers who were returning. It was not the tactics of the US troops that lost them the war, It was the lack of support, the superior Vietcong tactics and their inability to adapt to the situations as they became apparent. ...read more.