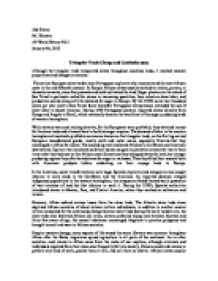 The Triangular Slave Trade and its Effects.

Ada Rivera Mr. Hamstra AP World History Pd 2 January 8th, 2012 Triangular Trade Change and Continuity essay Although the triangular trade transported slaves throughout countless lands, it reached massive proportions and changes on society. The earliest European slave traders were Portuguese explorers who reconnoitered the west African coast in the mid-fifteenth century. In Europe African slaves usually worked as miners, porters, or domestic servants, since free peasants and serfs cultivated the land. Sugar planters on the island of Sao Tom� in particular called for slaves in increasing quantities, they relied on slave labor, and production soared along with the demand for sugar in Europe. By the 1520's some two thoudand slaves per year went to Sao Tom�. ...read more.

The second leg took enslaved Africans to Caribbean and American destinations. Upon arrival merchants sold their human cargoes to plantation owners for two to three times what they had cost on the African coast. Sometimes they changed slaves for cash, but in sugar producing regions they ofter barted slaves for sugar or molasses. Then they filled their vessels' hulls with American products before embarking on their voyage back to Europe. In the Americas, social transformations were huge. Spanish explorers and conquerors also sought laborers to work lands in the Caribbean and the Americas. As imported diseases ravaged indigenous populations in the western hemisphere, the conquerors found themselves in possesion of vast stretches of land but few laborers to work it. ...read more.

Despite massive change, some aspects of life stayed the same. Slavery was common throughout Africa after the Bantu migrations spread agriculture to all parts of the continent. As in other societies, most slaves in Africa came from the ranks of war captives, although criminals and individuals expelled from their clans also frequently fell into slavery. Owners could order slaves to perform any kind of work, punish them at will, and sell them as chattel. African slaves usually worked as administrators, soldiers, or even highly placed advisors. In conclusion, the Triangular Trade helped to increase population growth, as well as a decrease of population because diseases were transported, also it was lucrative for the development of food crops, arms, and silver in countless nations. Also, new social classes were created such as the criollos, mestizos, mulattoes and zambos. The triangular trade was a profitable technique to obtain a great amount of resources with Europe, Asia, and other lands. ...read more.