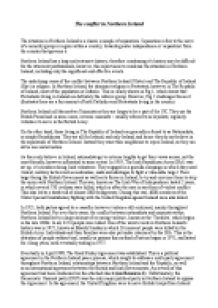 For over thirty years, the conflict between nationalists and unionists within Northern Ireland led to a large amount of recurring violence, known as the 'Troubles', which began in the late 1960s. In all, 3254 people were killed. One of the worst events in Northern Ireland's history was in 1972, known as b****y Sunday in which 26 innocent people were killed by the British Army. Individuals and their families were also put under interment by the IRA. This is the detention of people without trial, usually in prisons this method of torture began in 1971, and lasted for 4 long years, until eventually ending in 1975. Eventually in April 1998, The Good Friday Agreement was established. This is a political agreement in the Northern Ireland peace process, which sought to address a multi-party agreement throughout Northern Ireland, relationships between Northern Ireland and the Republic, as well as an international agreement between the British and Irish Governments. An overall of this agreement has been condensed on the attached sheets (see Resource 1). ...read more.

People in both Eire and Ulster have shown signs of union-ship, i.e. In Northern Ireland, there are many peace walls which say things such as 'prepared for peace'. Unfortunately, the wall also says 'ready for war'. This suggests that the conflict between Northern Ireland will also be a reminder to the several years of unrest for civilians, and hence they will be willing to fight for their ancestors, whether this means a war between the Republicans or just prejudice against them. (See Fig. 3) Honestly, I think that there is not anything that can be done in the future to ensure peace. I think these two countries may be working in harmony together - through their political leaders, however, the two groups will never be associated with peace, no matter what lengths people go to. All we can do as geographers, is aim to think of methods to maintain this harmony, and help these countries not to regress back to the troubled times. But to ensure there is a sustainable concord in tact, for now at least. ...read more.